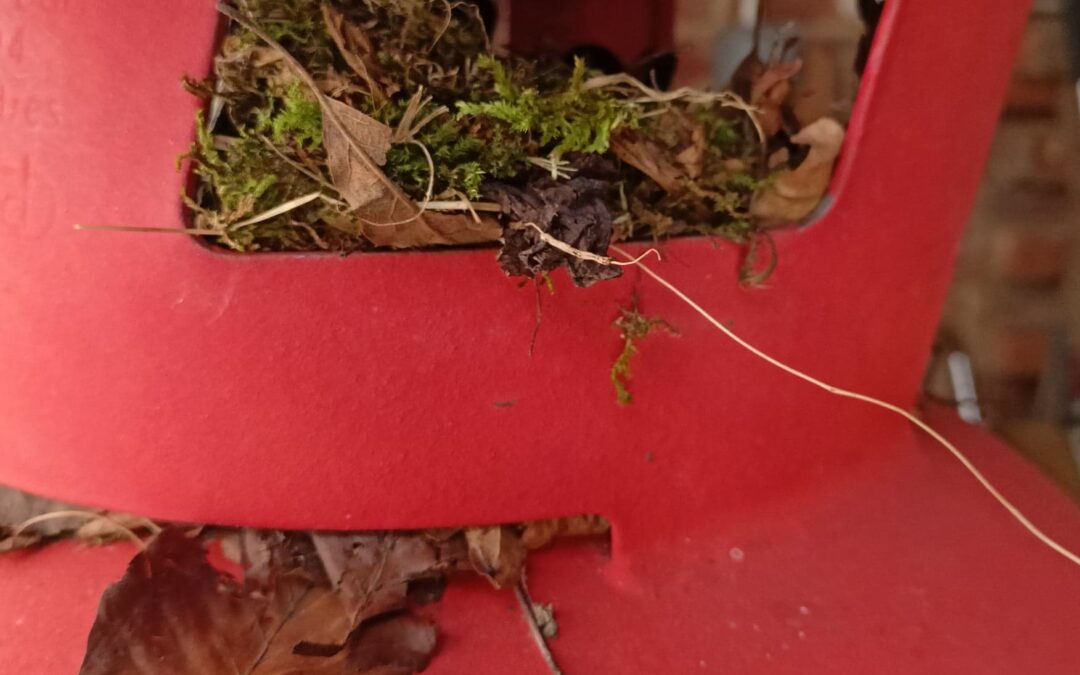 The North wind doth blow,
And we shall have snow,
And what will poor robin do then, poor thing?

He’ll sit in a barn,
And keep himself warm,
And hide his head under his wing, poor thing.

Alternatively he could build a nest in the top of a propane gas cylinder and sit tight until it warms up. The photo above is of the cosy little nest it has built, it has a cardboard box as a roof and is in the shelter of the open fronted boiler room. It seems a slightly odd choice of location because I walk past that spot probably 20 plus times a day, within a foot of the gas cylinder, but one assumes that they thought it through. One day last week when I saw a bird leave the nest I lifted the carboard box to peep in, there were 6 little eggs in the bottom of it.

The weather last week was a shock to the system, particularly coming directly after perfect warm spring conditions only days before. On Friday morning I woke to a proper covering of snow, and there were several brief mini blizzards during the day. Nellie went out in the garden with me when I fed the chickens and ducks and absolutely loved charging around kicking up the dry powdery snow; it was the type that squeaks when you walk on it. There have been some cold frosty nights, so I held off planting out some of the seedlings I had planned to get in the ground. I actually planted a row of lettuce and 2 of beetroot today, because it looks like the temperature is going to rise a little now, and rain is forecast overnight, so they should get nicely watered in.

Walking this morning was a treat, barely a cloud in the sky and the natural world in full voice and bursting with vitality. As we walked across the open farmland the Skylarks were up in force, larking around. In the hedgerow cheeky Long-tailed Tits flitted through the fresh green foliage playing a game of hide and seek. Bachelor groups of mallards cruised the river in search of young free and single females of the species. Walking through the wood the Chiffchaffs were chiffing and chaffing, and gravity defying Bumblebees were bumbling between Celendines, Stitchwort and Dandelions to load up with pollen or nectar. All of this against a backdrop of the freshest and most vivid greens – it gladdens the heart.

If you haven’t tried a Hot Cross Bun from Woosters do so, they are top notch! They are not one a penny or two a penny, but they are worth every penny. I bought some at Wyken yesterday and boy are they good. Get to the market early if you haven’t pre-ordered them because they go like hot cakes.

Not much has changed in the shop this week, so the beautifully tender purple sprouting broccoli is still in it, as is Swiss chard – good steamed, or stir fried. There will be curly kale too. Rocket will be from the polytunnel this week, I am turning the greenhouse crop into the soil as I need the space for planting tomatoes. There is parsley and chives, and I will be making the first batch of wild garlic pesto. Apples will be Royal Gala from Italy, the Braeburn last week were not, in my opinion, as tasty as those from Kent, but quite nice. There are regular and Tarocco blood oranges. The mini plum tomatoes from the Isle of Wight are pretty good for this time of the season, and there will be red peppers from Spain. The root veg that you know and love, but that you are probably growing a little tired of by now, continues to be available, including my stocky leeks.

I caught another young rabbit in my live trap last week, but it’s big brother/sister/father/mother/uncle/aunt is proving more difficult to lure in. The burrow in the polytunnel has been reopened (it’s like Tom Dick and Harry in the Great Escape!), and there are scrapes in various other locations. Last week I likened myself to Mr McGregor, this week I feel more like Elmer J Fudd!

I had an emotional moment at the farmers’ market yesterday. I was talking with one of my regular veg box customers, and during our conversation she informed that he former partner had died. She had assumed that I already knew, but the news genuinely shocked me, setting us both off with quivering lips and cracked voices. Colin was a giant of a man with a heart to match, there was nothing sophisticated about him he was just a really good bloke. He died aged just 50. I had known him since he moved out to Suffolk from London some 12?14? years ago, but saw him less frequently after the break up of the relationship, but he still came to the market from time to time. I still can’t quite believe that I won’t see him again. Dear Colin.

Hopefully the warmer temperatures this week will mean that you can turn your heating thermostat down a notch – with the energy price hike and inflation rising at its fastest rate in 30 years the squeeze is starting to be felt. One thing that there is no need to cut back on is organic veg….that would be a step too far. Have a great week.