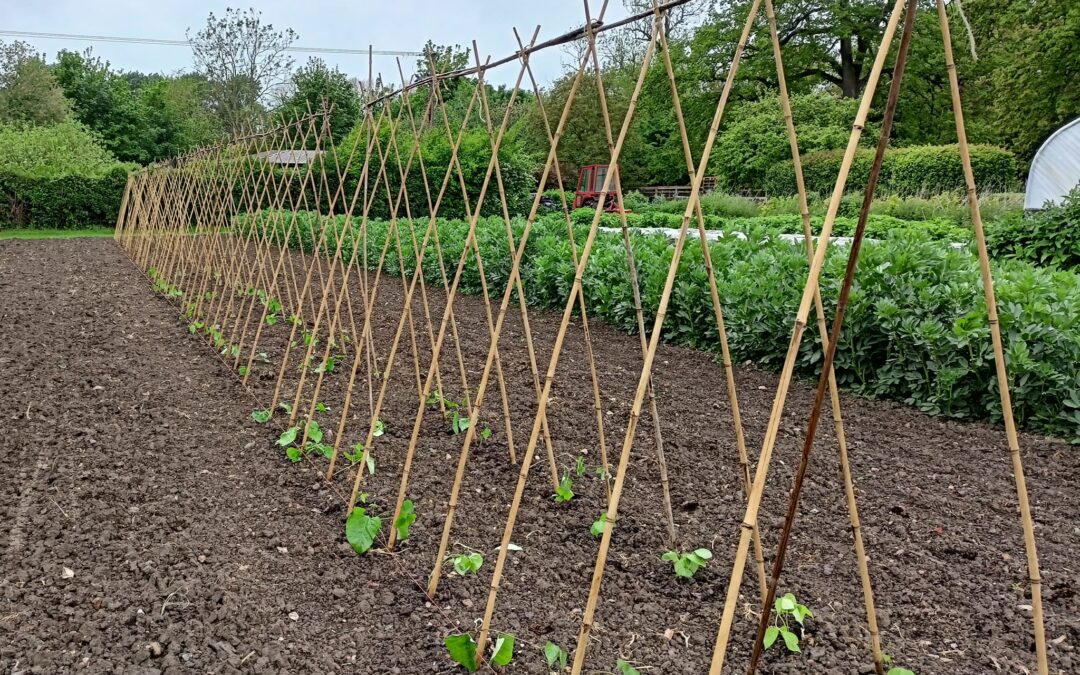 How did I get on? Did you say how did I get on? Well not as well as I wanted to really. Too many things got in the way. Most of Monday was lost to the Soil Association annual audit; the inspection went well with no non-compliances noted. It was the first time that I had encountered this inspector, so one is never quite sure how pedantic or severe they will be, but I need not have worried, he was very fair.

The second thing to thwart my plans was an unscheduled trip to the dentist. On Sunday evening I broke a tooth, and because of the inspection on Monday I had to grin and bare it until securing an emergency appointment for 11.00am Tuesday. A temporary filling was administered pending the fitting of a crown in July (£288 as a NHS patient thank you). By Wednesday lunchtime half of the filling had broken off, and on Friday the rest of it came out!

Most of Friday was taken up by the funeral of a good friend’s father, and boyhood pal of my own dad. Michael was the grocer in the village and a well respected pillar of the community, he was also quite a character with a sharp wit. A measure of his popularity was the size of the cortege following the hearse from the site of his old shop to the church, with the main street lined with villagers, and other shops in the village closing as a mark of respect. Michael was 94 years old when he passed away, so it wasn’t one of those tear jerking affairs, it really was a celebration of a long life well lived. The weather was lovely, and at the wake I was reacquainted with ‘Tiger’, and old buddy from the pub who I haven’t seen for the best part of 40 years. I also met Julie, who I last saw at Primary school!

My grandmother never forgave Michael for ‘borrowing’ my dad’s pedal car, but what boy would be able to resist this little beauty? 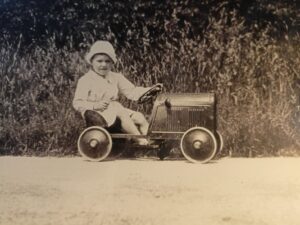 So you can see why my week was not as productive as I had hoped that it would be, but I did get some planting and other jobs done in between these events. I erected my climbing bean supports and planted runner and climbing French beans – most of which have already been nibbled off by the rabbits. I have planted out celeriac, more lettuce, and Florence fennel, with chard going in tomorrow. I hoed the onions as I am determined to keep them as weed free as possible this year, and I have got the polytunnel ready to plant up with tomatoes.

This week I am making a trip into the Fens to collect some organic asparagus, I have resisted so far, but am unable to any longer. The greenhouse chard is finished now so there is a real shortage of green vegetables. I have kept courgettes in the shop, but I realised that I had forgotten to order them so I am hoping that my supplier will be able to get me out of a hole. My own courgettes will be going in the ground this week. I think that I will be picking the first broad beans next week – every bit as exciting as asparagus. The first outdoor lettuces are ready to cut, there will be round red ones, and red oakleaf. Cherry vine and mini plum tomatoes from the Isle of Wight will be available, as will Rhubarb. There are Cripps Red apples, oranges and kiwi fruit. The wild garlic is now past its best, so pesto will be sorrel this time.

What do you reckon to this handsome chap? It’s a Poplar Hawkmoth. Alan the farm manger found it by the door to his tractor barn and asked if I knew what it was? I told him that it was one of the Hawkmoths, but that I didn’t know which one. It had been on the barn all day, so I picked it up and took it into the kitchen garden and gave it the choice of Rosemary and Comfrey to revive it. That evening I looked it up and discovered that it was indeed the Poplar Hawkmoth and that unsurprisingly it feeds on Poplars, of which there are some close by.

You know my gas cannister Robin nest? Well I read somewhere that they do not reuse the same nest….well mine have. There were more eggs in it when I looked last week and the parents are darting back and forth. I have seen some adolescent Robins out the front of the potting shed, quite possibly from the first brood. Up by the moat there is one family of Canada Geese with 3 goslings born a good couple of weeks ago, and today a different pair appeared with 6 brand new babies.

The wait is nearly over. I went through the bees yesterday and discovered that there will be honey to extract by this time next week, so with a fair wind it might be available to purchase from the shop next time it is updated. Late this afternoon I collected a swarm and hived it; I am hoping that they are still there tomorrow morning (they aren’t always).

The wait is nearly over. Two months after the event my black finger nail has finally decided to come off….well nearly. It is now flapping, held on by 3mm of hinge. I have tried pulling it off, but it is still stubbornly adhered in that small area, and |I don’t want to tear it. I am keeping it covered with a plaster to stop it from snagging on things…..and so that I don’t frighten the children.

So everything is back to normal this week – deliveries and attendance at Wyken next Saturday. It looks like being another fine week, with pretty warm temperatures in the first half of it, including 14 degrees overnight. It doesn’t look as thought the sky will be clear for observing the Super Blood Flower Moon and the lunar eclipse. It will be visible (the eclipse) just before dawn tomorrow morning if the clouds part to allow us to observe it.