2 wheels on my wagon

Do you remember that song? I used to hear it on ‘Junior Choice’ on the radio every weekend, with Leslie Crowther presenting, and then Ed ‘Stewpot’ Stewart. Other songs that regularly featured included ‘Big bad John’, ‘Puff the Magic Dragon’ ‘dem bones’ and ‘Sparky’s magic piano’.

Anyway, I digress. Last Tuesday I had two new tyres fitted to the front wheels of my van. The previous Friday, while out on my delivery round, I got a puncture in the driver’s side front, and on closer inspection I discovered that both front tyres really needed changing. I fitted the spare and put the punctured one in the back, so they were to put 2 new ones on and put the spare back under the van in its sling. I drove off happily, in the knowledge that I was street legal and better prepared for the winter ahead. Later in the day I found that they hadn’t put the spare back underneath the van, but worse than that it was the flat damaged one that lay there in the load space. That meant that they had changed my perfectly good spare, and thrown it away, and I was driving around spare-less! This was a situation that had to prevail for the next couple of days, because I was busy doing other things. I finally managed to get back to express my disappointment to the representative of the nationwide tyre specialist on Friday afternoon. He was extremely apologetic, and after some minutes rifling through the ‘dead’ tyres out the back he returned with my nearly new spare, which was fitted to its wheel in double quick time. I felt very uneasy driving about without a spare, what with the pot holes and who knows what on the roads, so I am now a happy bunny; though it could all have been easily avoided. The good news? My puncture was on ‘Black Friday’, so I got a really good deal on the new tyres – every cloud and all that.

Last week I started constructing a basic shelter for protecting my new ride on mower and my rotavators from the worst of the winter weather. It’s nothing fancy, but I’m hoping that it will do the job. The framework is almost complete, and tomorrow I will take delivery of some weatherboarding, with which I will clad the carcass. That will just leave the roof of the structure, to be decided. I reckon it will be a corrugated affair, you can’t go far wrong with that. Mind you, we are in for some alarmingly strong winds tomorrow, or so they say, so it might not be the day for moving 4.8mtr lengths of timber about; I’ll play it by ear.

I’m getting into a bit of a tizzy about the Christmas arrangements. I haven’t heard any dissenting voices following my suggestion of last week, but the potential problem lies in Sudbury. I deliver some orders to Cradle, the vegan restaurant and bakery in North Street, which is happy to be a collection point for my customers. The problem arises because Cradle will not be open for business on Monday 23rd. For customers close to or in the town I am prepared to make home deliveries, but some come from further afield, and it’s those that I am concerned about. I may have a flash of inspiration in the next week, which would be good, but confidence is low. What I am going to do is take orders on Saturday 21st for collection at the Wyken Christmas farmers’ market.

I’m giving you an early taste of your favourite festive meal this week. Brussels sprouts are not just for Christmas, so a week ahead of time you will find them in the ‘shop’. You will also find carrots, beetroot, parsnips, leeks, swede, squash, garlic, 3 types of potato, mushrooms, curly kale, onions, red onions, very limited green peppers, and chilli peppers. There will be oranges, lemons and kiwi fruit. 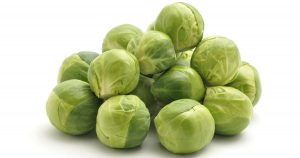 It’s the General Election on Thursday, and I’m fearful that the result will not be to my liking, so it will be best to avoid talking to me on Friday morning as I am likely to be grumpy. However, my bad humour won’t last, life will go on, and I’m sure that we will all be happy living in little Britain. What I am really dreading is seeing ‘True Blue’ John the fishmonger at the market on Saturday who will be like a cod with two dorsal fins.

That’s it, I’m outta here, have a good week, and keep your eyes peeled for more news on Christmas deliveries.