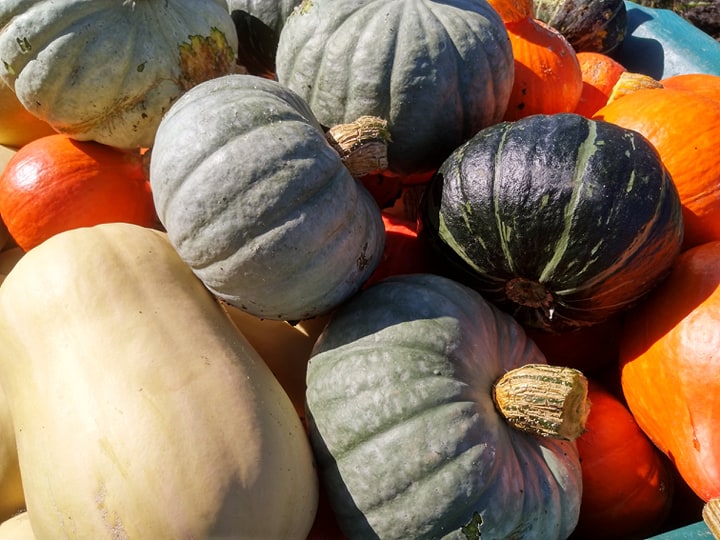 If the times they were a changing a few weeks ago, now the times they have a cha-anged. It’s proper autumn – cooler, wetter, darker, and as a consequence the plucky summer crops have decided it’s time to hang up their boots, so say a fond farewell to courgettes, patty pan squash and tomatoes. A few toms may find their way into the standard veg boxes this week, but they really are thin on the vine now; in fact today I pulled up another bed of them from the greenhouse. More positively, the red peppers will carry on for another couple of weeks, unless we get some ridiculously severe frosts, but I don’t think that is likely to happen.

For most of the time that I was clearing the tomato bed I was accompanied by my little ringed Robin friend. He was coming within a metre of me as I exposed the roots of the plants, and with them an easy meal of appetising bugs. I have had his company throughout the year, and I would really miss him should anything happen to him. Less welcome in the greenhouses are the pesky small rodents; a selection of voles, shrews and mice are proving something of a nuisance. A row of parsley has been nibbled down to its crowns, and I had a couple of hundred lettuce plants in trays awaiting planting that were attacked on Friday night, with dozens of them beyond recovery. Measures have been taken to address the problem, I will leave it that, but it’s a case of shutting the stable door after the horse has bolted.

Because of the tomato clearance there is a plenitude of green ones for you to weave your magic with; chutney, fried, curry, chilli jam. Let’s face it, chutney is probably your most likely choice, but I reckon you have got no end of recipes for that – WI, Mrs Beeton, Delia, so I’m not going to steer you in that direction, no let’s go south, deep south, with fried green tomatoes. If I have shared this with you before I apologise, but I think it’s worth giving this recipe a go.

So that’s the green tomatoes, but it was a pretty good season for red ones too. I had a tally up today, and my abacus reliably informed me that I picked 474kg, that’s 1045lbs in old money. It could have been significantly more, but for the row of orange tomatoes that I grew in the polytunnel that remained on their vines, because they tasted of nothing; I couldn’t bring myself to foist them on you. The seed catalogue made them sound very alluring, but I have concluded that some of the vendors are no better than snake oil salesmen. Next year I will stick to the tried and tested I think, though I am sure that I will be seduced by a prosaic description and a fancy name.

The winter squash harvest was not as good as I was hoping for, but the butternuts did better than expected. They are all laid out in the greenhouse to cure properly. Many of the Uchiki Kuri and green Kobocha types have some nibble marks on them from those annoying voles, but it’s only surface damage. The butternut squash were left alone, so I will hold them back for a while as they will store for longer. 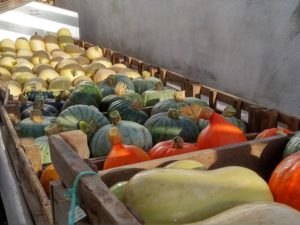 It’s a different looking shop this week, because we are going heavy on root crops; carrots, leeks, swede, parsnips, beetroot, and I am going to pull some turnips. There is broccoli and spinach again, and red and green sweet peppers, and a nice selection of chilli peppers, as shown below. I am going to show sweetcorn as being available, but it is with some trepidation, because not all of the cobs that I have inspected have been fully filled with kernals, but you don’t know that until you have stripped back the leaves to expose them. I will supply them in good faith, but if you find that they are not fully formed you must let me know so that I can recompense you. Potatoes are red ‘Alouette’ and waxy ‘Charlotte’. Apples are Adam’s Pearmain and it’s the start of the Italian Kiwi season, so they are available, as are some new season lemons that will have some greening on them. Apple juice is in the shop, but that is subject to a batch being ready for me to collect from the orchard. 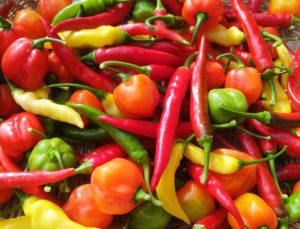 This morning I had my annual 45 minutes of frustration trying to book tickets for the Glastonbury Festival next year. I didn’t even get access to the website before the message that “all tickets are now sold” appeared. It’s the 50th anniversary in 2020 so it would have been a good one to have attended, though sadly Ginger Baker won’t be on the bill following his death today; how he made it to 80 goodness only knows. My chances of ticket success were not enhanced by my music buddy Ian, who lives and works in Connecticut, who should have been hitting refresh on his laptop computer at the same time as me, but he slept through his alarm!

Right I’m off, have a good week, and I know that I’m being cheeky, but I wouldn’t mind a few dry days now.