Phew, thank goodness that those 100 lines are out the way. I was taken to task after writing last week’s blog, by a customer with zero tolerance of incorrect grammar usage. My metaphorical wrist is still smarting from having been slapped….oh no, I haven’t fallen into a metaphorical trap have I? It was all to do with my phrase congratulating the organisers of the Rugby World Cup, who managed to stage matches just a day after typhoon ‘Hagibis’ wreaked havoc across the country. I wrote “Bravo too for those that facilitated the match going ahead”. Oh dear, I sinned! It should have read “Bravo too for those WHO facilitated…” My very correct customer pointed out ““That” is used for inanimate objects such as your greenhouse and tractor and “who” is for humans. People seem to have forgotten this small thing nowadays!”. Oh no, have I incorrectly used double quotation marks? My grammatical confidence is now so low that I am reluctant to write anything; I’m a bag of nerves – metaphorically speaking of course.

An update on ‘Volegate’……it’s not only voles! They have been joined by mice in the low greenhouse; one can almost imagine a rodent tag team taking it in turns have its fill of succulent young greens before touching paws with the next crew. Outside they are still greedily attacking anything that they can get their nasty little teeth into. The most recent victim, discovered a few days ago, is Celeriac; some of them have been gnawed to the point where only a hollow shell remains. I am at a loss to know quite how to deal with this furry little menace.

Early last week I finished clearing the last of the tomatoes from the polytunnel, and in their place now grows 2 types of chard, spinach, kale, and I sowed a couple of rows of rocket. In the greenhouse there is only one bed that still has a summer crop in it – sweet peppers, the others all have leafy greens and lettuces growing in them for winter cropping. 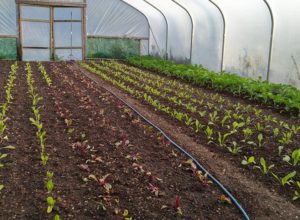 I bit the bullet and bought a new (second hand) ride on mower last week. I just got fed up with going to use the old one and it refusing to cooperate. I need the machinery to work when I want to use it, and I have found that the Basil Fawlty method of beating it with a branch from a tree just doesn’t work. The new machine is a Hayter, by Royal appointment don’t you know? So it’s got to be good….surely? 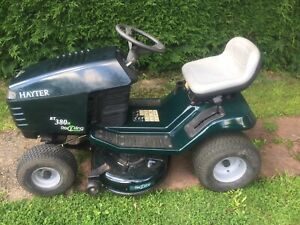 Let’s talk vegetables. This week I will have leeks, beetroot, swede, parsnips, turnips, brown onions, red onions, carrots – a veritable rootfest. There will be curly kale and chard, the last of the sweet corn, small Uchiki Kuri squash, medium sized Green Hokkaido squash, mushrooms, sweet red peppers, chilli peppers and garlic. Potatoes are ‘Alouette’ a red skinned all rounder, ‘Cara’ an excellent baker/masher/roaster, and ‘Charlotte’ a lovely waxy salad potato – a veritable spudfest. I will have some small green eating apples, kiwi fruit, lemons with a fair bit of greening on them, and large new season Spanish oranges. 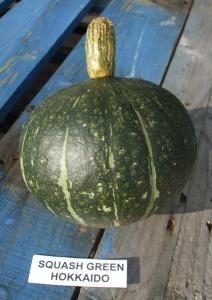 If any of you have been out on a nice country walk in the past week or two will probably have noticed what an exceptional autumn it has been for fungi. I don’t remember a season as good as this, with mushrooms and toadstools of all shapes and sizes in abundance. I just wish that I was more confident in identifying them, I must enrol on a course to educate me in that respect, because I am sure that many of them are delicious culinary treats, but I’m too scared to try them. Also, I meant to say a few weeks back; what a good year for Blackberries too, which surprised me given how little rain we had until recently.

We will be at Steeple Bumpstead farmers’ market on Saturday, as well as at Wyken. It will be torture for me again, as the England V New Zealand semi-final match will be kicking off just as the market commences. I will have to dust off the transistor radio to keep me abreast of events. How I suffer for my customers.

The clocks go back next weekend, then we really are into the dark days before Christmas. I wish you a good week, I think that it will be a drier one, so I may be able to get on with some cultivating and other vital outdoor work, and you might be able to hang your washing out on the line with some degree of confidence.