It’s been a blustery old weekend, not a bit cold, but gardens have been buffeted by the wind. At home our hollyhocks have taken a beating, but we do live atop a hill, and the south westerly arrives unimpeded. In the field behind us is a crop of phacelia this summer, which has just come into flower in the past few days; it’s a lovely sight. It’s a fast growing high biomass plant that holds nitrogen and supresses weeds, used as a soil improving green manure. Its eye catching mauve flowers are particularly good at attracting bees and other beneficial insects; as the bee flies my hives are located about a mile and a quarter away from home, so they might come and pay a visit.

I expect that you are all beautifully coiffured after the opening of hairdressing salons and barbers shops yesterday. To be honest it didn’t come a moment too soon, I have seen some frightful sights. Some male customers and acquaintances were looking like the wild man of Borneo, whilst some of the ladies, well….. I have one word…..roots! Male pattern baldness has advantages during a pandemic, all you need is a power supply for your clippers, then away you go. It avoids those dreadful queues and the banal small talk synonymous with hair establishments.

Dentists reopened a couple of weeks ago, but I haven’t made an appointment yet, though I must, because several weeks ago I lost a filling from a tooth, and I now have the most efficient food trap imaginable – you couldn’t design one better. I spoke with a customer at the market yesterday who went for a check up a few days ago and was horrified to be charged £5 for PPE; he has to go back again this week and he said that he will be taking his mask and apron back with him to avoid a second charge.

I rescued a hummingbird hawk moth from the low greenhouse last week. Like so many insects, it had got in but couldn’t find its way out. Fortunately the flower pot and cardboard square trick worked, so off it hummed when I released it outside. This morning when we were walking Nellie we stopped at a spot by the river where there is a tiny pebbly beach where she normally laps at the water. For some reason she refused her drink, so I went down to try to coax her. While I was down at the water’s edge Jennifer spotted a grass snake (also known as a water snake) swimming across the river only a few feet from where I was stood. It was lovely to watch it wind its way across the stream. They spend a lot of their time in and around water, in search of their favourite meal of amphibians. On the same little beach I found the claw of a large crayfish, possibly the remains of an otter’s supper?

The Maris Bard new potatoes have now finished, so we move on to Colleen. Of those I have dug thus far fewer have been damaged by slugs, so I am hoping for less waste, as I ended up scrapping around 25% of the Maris Bards. Old potatoes are no longer available. This week there will be chard and cabbage, cucumbers, mixed bags of tomatoes from the greenhouse, courgettes, beetroot, carrots, padron chilli peppers, mushrooms, lettuce (Little Gem and loose leaf), onions, garlic and ginger. The only fruit there will be are lemons. The European orange season is at an end, but I refuse to buy them airfreighted from South Africa, so apologies to all of you who love your oranges. 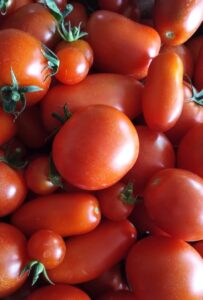 I was cutting the grass in the orchard today, and the prospect of a bumper apple crop is still looking very good. The first varieties to ripen will be ready to pick next month, so not long to wait. The runner beans are in full bloom at the moment, with tiny beans beginning to form as the flowers fade, so with luck I reckon we are just a couple of weeks away from the first pick. Sadly the broccoli suffered heat damage during the very hot weather 2 weeks ago, so it didn’t hold as well as I was hoping it would . Long sweet peppers are growing fast in the greenhouse, but they take ages to turn red. Some aubergines are almost ready to cut, but there are so few that I am unable to add them to the shop; if you would like to go on the waiting list for one please add a note on your order, and I will pick a few lucky recipients at random – they will be £1.50 each.

Last night we watched the award winning musical show ‘Hamilton’ on TV. I really enjoyed it, though I didn’t particularly like the casting of the main character. What the production did expose is my woeful lack of knowledge of the founding of the USA, so in that respect it has piqued my curiosity to learn more about that interesting period of history. Sometimes you just feel a bit dumb….or is it just me?

After having missed out on our holiday in Cornwall a fortnight ago, we have now booked a cottage in North Norfolk for the first week in September. We will be just in land from the coast near Brancaster. It will make a change, and provide an opportunity to discover some interesting places much closer to home.

I will be at Wyken again on Saturday. The market is now more or less back to full strength in terms of stallholders, though the layout is very much altered from pre-Covid days, with lots of space between stalls. There is also the added bonus of the very popular pizza van, which fires up its oven from around 11am I believe.

Have a good week; mine will largely be dedicated to weed slaying – they are getting out of control!