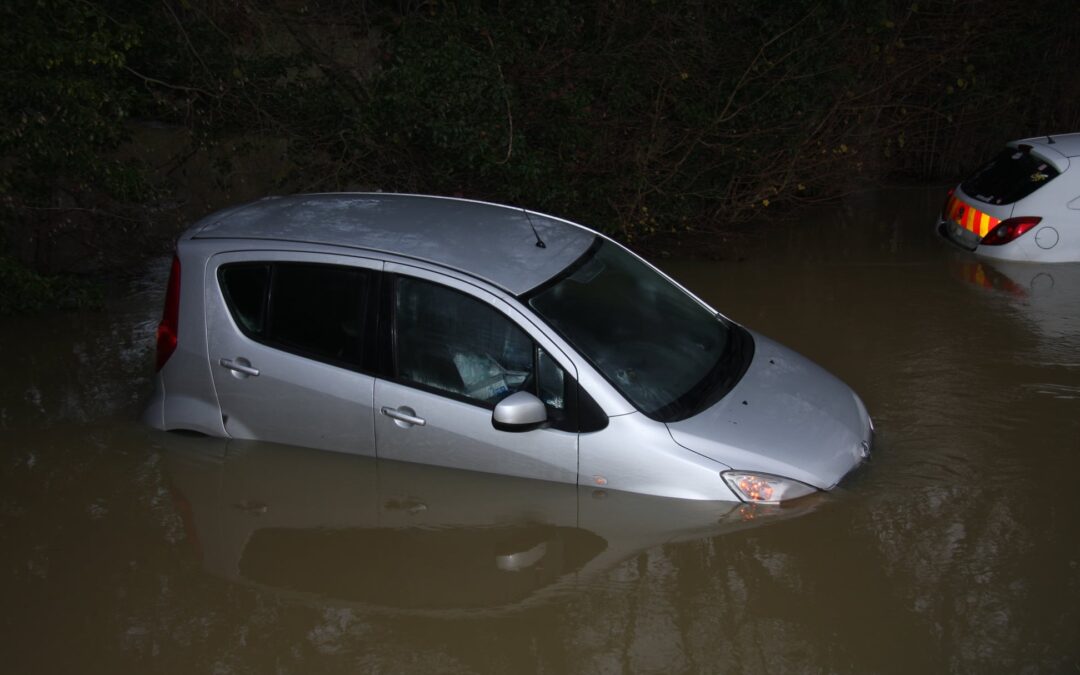 Friday’s delivery round was fraught to say the least; conditions were perilous in places. The snow caught me out to start with, because after such a ghastly wet Thursday I didn’t think for a moment that any white stuff would settle even if any fell. Down here in the border country it was quite thick on the ground – even on the roads, but it was the flooding that proved to be more hazardous. Torrents of chocolaty brown water were being disgorged onto the roads from fields, and from overflowing poorly maintained ditches, gathering in deep fords wherever there was a low spot in the road.

My delivery route takes me from Cavendish to Glemsford and then up to Bury via Hartest and Whepstead, and anyone who is familiar with that road will know that it is not without its ups and downs. Between Hartest and Whepstead is where the trouble really started, by the cricket field in Brockley. I came upon a line of cars facing an expanse of water covering the lane, and 100 metres ahead sat a stationary vehicle with flashing hazard lights reflecting in the muddy flood. One by one the vehicles ahead of me performed 3, 4 and 5-point turns, retreating to find another way to their destination. I did the same, but encountered another impassable stretch, so had to retrace my steps and find an escape route. I finally made my delivery in Whepstead via Horringer, and even then I had to brave a very deep flood; but the worst one was where the B1066 joins the A143 on the outskirts of Bury. A car was being dragged out of the flood, but other vehicles were going through, so I followed – but very nearly regretted it. The water was very deep, and as I ploughed through it the engine spluttered and coughed a bit, followed by a horrible electrical burning smell. I dare not stop, I just hoped that a bit of air running through the engine would sort it, and it seemed to do the job. It took me 2 hours to get to Bury, twice as long as it usually takes.

North of Bury there was less snow and not as much water on the roads, so I managed to make up some time, but I was thwarted by a serious flood in Rattlesden, which meant that I was unable to deliver to one of my customers. I had to double back to Woolpit to join the A14 to make my way to Long Melford and Sudbury, which I usually get to via Lavenham after leaving Rattlesden. My next concern was getting back to Moyns Park and home, because the river level was rising dramatically. I did get home, but on Saturday morning I had to make a big detour to get to Wyken for the farmers market because the river Stour at the bottom of the hill had breached its banks. This week’s photo shows two abandoned vehicles in the lane by the bridge leading to Stoke by Clare, fortunately the drivers escaped unhurt…..if somewhat soggy.

My name is Philip and I am a treatment failure. There I’ve confessed. Actually that was what I was told by my GP following my 4th telephone appointment. I have tried every type of ear drop known to science, plus nasal sprays and drops, and steroid tablets, none of which have improved my aural condition. So now I am being referred to the ENT department for further investigation, after well over 6 months of discomfort and loss of hearing (thankfully only in one ear), and without the aforementioned GP having looked at the ear in question to determine whether what they had prescribed was suitable for whatever condition I am suffering from. It’s no wonder I’m grumpy.

We can’t delay it any longer, we’ve got to talk about Christmas. I have a plan, and it requires your cooperation and some forward thinking on your part. Following the update to the website this time next week I am going to require your regular order for the week, plus a second order for Christmas week – both (or one or the other) to be with me by the Tuesday night deadline on the 15th. It is the only way that I will be able to plan deliveries, and not be left with surplus perishable produce. I will of course remind you of the arrangements next week. At the moment I am planning local deliveries on the evening of Wednesday 23rd, and all others on the morning of Thursday 24th – that leaves me Christmas Eve afternoon to do my shopping. My last appearance at the farmers market for 2020 will be on Saturday 19th, returning on 9th January 2021.

Tomatoes from the Isle of Wight are now finished until April next year. I may occasionally buy some Spanish ones in the interim if there is an appetite for them, but there is a lot to be said for looking forward to the new season. This week there will be Savoy cabbage, cavolo nero, cauliflower, sweet potato, swede, parsnips, carrots, beetroot, mushrooms, leeks, onions, squash and chilli peppers. There is garlic, ginger, and this week turmeric. There will be oranges, kiwi, lemons, limes and Adam’s Pearmain apples. Apple juice, tomato juice, honey, and spinach and red onion pesto.

I’ve got the tiniest Muntjac deer in the garden, it’s no larger than a hare. I’ve seen it on a couple of occasions and have tried to usher it out through an open gate, but thus far it hasn’t cooperated – our game of cat and mouse will continue. I had a lovely view of a barn owl last week, it was sitting on a post down a small lane as I passed in the van. It didn’t fly off until I was quite close so I was able to watch it glide off in all its ghostly magnificence.

After last week’s shenanigans ’tis the season to be a Scotch Egg maker. I have to say that I never considered it as a substantial meal, though thinking back to the days when I might have consumed one I suppose that it was quite filling…..another pint landlord please.

Apart from Emily’s advent calendar there is no visible sign in our house yet of the festive season. I have bought some solar powered fairy lights to illuminate the arch in the front garden, but I don’t want to peak too soon, so they will stay in their box for a while yet. Next weekend is soon enough to buy a tree – if there are any left. I hired a cleaning machine today to spruce up the sitting room carpet, so it wouldn’t bother me too much if we avoided spruce needles in the freshly laundered shag pile this year. If you are tempted to hire a similar machine please bear in mind that you should double the cost of the hire for the detergents that you will put in it. You will be amazed at how filthy the water is that you have to empty out of the machine – it looked very much like the flood water I described earlier – but we do have two cats and a dog prone to rolling in disgusting things.

Stay warm in this chilly weather, we’ve got more cold days to come this week – at least masks keep your face warm, but hopeless if you wear glasses.