A pain in the tooth

I honestly can’t remember the last time that I had a toothache, and I had quite forgotten what a horrid nagging thing it is. Sod’s law dictated that it had to come on over a Bank Holiday weekend, so I’m going to have to live with it until Tuesday at least. Painkiller tablets are controlling the discomfort, but it’s one of those situations where one’s tongue is attracted, by a mysterious magnetic force field, to the inflamed gum, applying pressure to it, like poking a stick into a wasps nest to see what reaction you might get. For such an incredibly smart organ, the brain can sometimes be pretty dumb.

There is a beautiful chocolate brown hen pheasant that has been around the garden for a few weeks, and on Wednesday afternoon as I was emptying my compost bucket onto the heap I came upon her, surrounded by 19 of the tiniest cute chicks imaginable. They were so small that they must only have hatched that day. The following day I made another trip to the compost heap and realised that the chicks were all around my feet, to the point where I was concerned that I might tread on some of them. I carefully picked my way through them, and later on in the day that had relocated inside the garden and were amongst the raspberry canes. There is little chance of them all surviving, there are too many predators about the place – Kestrels, Sparrowhawks, Stoats, and Tony the stablehand’s sleek and slinking Bengal cat ‘Khan’; but I do hope that she manages to rear some of them, I reckon they will grow into handsome birds.

I can confirm that it was definitely a Cuckoo that I heard last Saturday, because I have heard it most days since, and on Tuesday afternoon I saw it fly right over the garden, so yah boo sucks to you!

The tomatoes are all planted in the polytunnel now, but I’ve still got to plant the chilli peppers and cucumbers in there; these will follow on from the greenhouse ones. In the next couple of days I will set out the sweet peppers and aubergines in the remaining two beds in the greenhouse now that they have been cleared of the little spring onions and parsley. There will be a short break in the supply of parsley until the outside crop comes on stream in a week or two. The early potatoes have started to flower, and I dug a couple of roots yesterday for personal use, even though they are really a bit too small; they were absolutely delicious. I will start digging them to sell the week after next I reckon; before then I am getting some ‘Colleen’ from Cornwall, which should be very good. As mentioned last week, I will pick broad beans next week.

I am getting asparagus from Home Farm Nacton this week, I don’t know why they have been so long in making it available, but I am pleased that it is because I am confident that it will be superior in quality to the stuff from the fens that I have offered in the past two weeks; for my liking the spears were generally too big, resulting in too much stringy stuff at the thick base of the stem. The Home Farm crop is marginally cheaper too. I will be lifting Kohl Rabi this week, and cutting Swiss chard again; pointed cabbages may be ready next week. There will be courgettes, broccoli, carrots, onions, beetroot, tomatoes, garlic and lettuce. As well as the Cornish new spuds, there will be ‘Cara’ old ones, but it will be the last week of them. Lemons, kiwi fruit, oranges, honey, apple juice, dried pasta, and Chard & Chive or Sorrel pesto to go with it, make up the rest of what’s available this week.

In 4 weeks time I will be on my annual holiday. We are going early this year, travelling on the longest day, so we will have lovely long daylight hours down in Portscatho. I’ve got a new snorkel to try out this year, it’s one that goes right over your face, so you don’t have one of those horrible mouth pieces, that always make me feel like gagging. Going back to teeth, I had a mouthguard made by my dentist, which I was supposed to wear at night because my teeth grinding was so extreme that I lost chunks out of my two front teeth! Well I couldn’t wear it because it brought on the gagging impulse, so there it sits gathering dust in my bedside drawer. I’m really quite pathetic when it comes to stuff like that; it’s the same if I get something in an eye, I can’t bear anyone touching it, I flinch and toss my head around like an idiot. Anyway, the new snorkel should overcome any of that nonsense, but it won’t help me stay in the icy cold water any longer; my self diagnosed Raynaud’s disease means that my extremities drain of blood after about 15 minutes in the sea, leaving me with ‘dead men’s’ fingers, which take ages to regain any feeling or colour. The best, and tastiest, remedy, is to wrap one’s hands around a warm Cornish pasty – the cheese and veg is my favourite.

The parkland at Moyns park is looking particularly lovely at the moment, with the trees looking majestic, bedecked in their fresh green finery, and the grassland interspersed with swathes of cheerful buttercups that shimmer and sway in the breeze. The whole area will be cut for hay in a few weeks, and will provide the horses of the stud farm with nourishment through the winter. 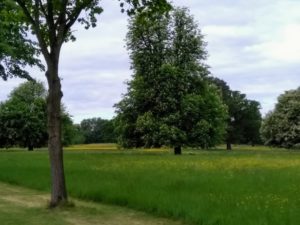 Ok, I’m off to self-administer some more pain relief. Have a good week.