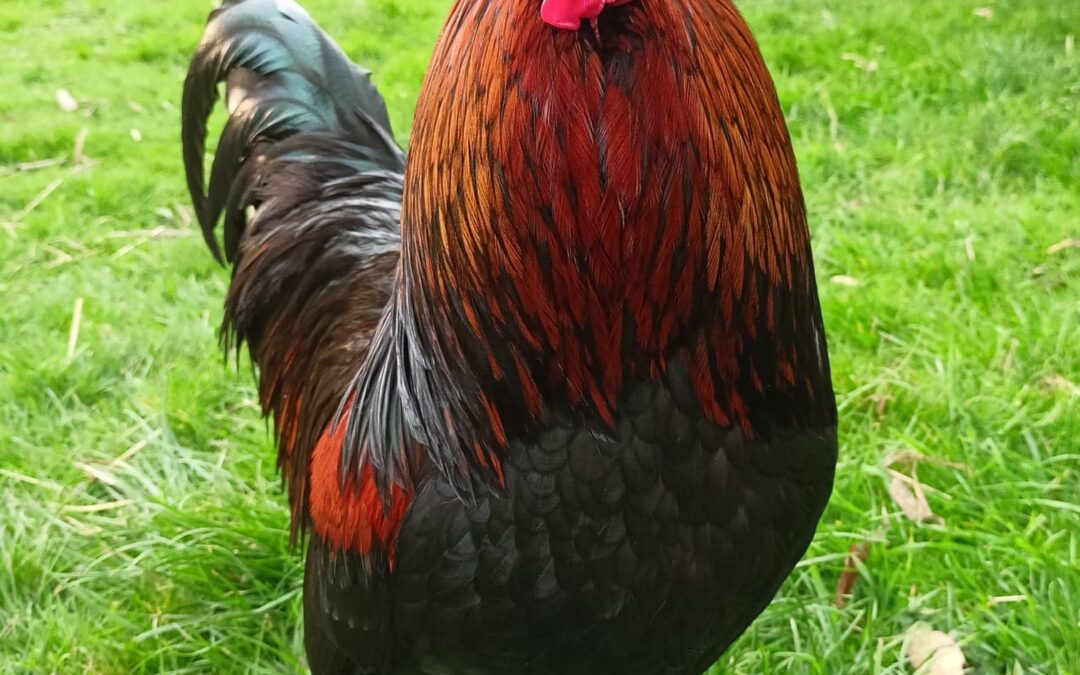 I don’t remember the moment when Beryl lost her voice, but I reckon that it was a good year ago. Beryl is our beautiful cockerel, and pre ‘croakgate’ she would lustily bellow out her ‘cock-a-doodle-doos’ at high volume from soon after first light, much to the delight of our neighbours. Fortunately we only have them on one side of us as we are the last property in the village, because Beryl was like a Marshall guitar amplifier, she had a volume control that went up to 11! For many months now all that has issued from the coop has been a pathetic throaty croak, but in the past week or two there have been signs that the vocal chords had begun to sort themselves out, and now she is sounding much more like her old self and has a crow to match her magnificent appearance – albeit with the volume set at around 8, which is frankly loud enough. For those of you that don’t know, Beryl was sold to us as a point of lay hen, but it soon became apparent that there was never a hope in hells chance of her ever laying an egg, by which time she had been given a female name, and we have never thought it necessary to change it to something more masculine. So Beryl it is and ‘she’ she remains, though sometimes a he is used descriptively, but in these days of gender fluidity that’s fine – we were just a bit ahead of the curve.

Well who would have a thought it? A dry, bright and pleasantly warm Easter weekend. It has been a lovely spell of spring weather, and boy has nature responded. The countryside is looking magnificent cloaked in every hue of green that you can imagine, and blossom bursting forth in the hedgerows and the fields, with the oilseed rape changing from a haze of wispy blooms just days ago to a solid block of vibrant yellow, brazenly announcing its arrival – cooee, I’m here! Down in the orchard the first of the apple trees are just coming in to bloom, so it is with fingers crossed that I view the long range weather forecast scanning the data looking for potentially damaging night-time temperatures. Last year some destructive frosts at blossom time resulted in a very poor apple crop, I am hoping for a more successful fruit set this season.

I am way behind with planting, and that’s largely as a consequence of the ground that I tilled a couple of weeks ago now being baked into solid clay rocklets. At the beginning of the week some rain was forecast, and I intended running the light power harrow over it to break them down to a half decent seed bed. My plan was thwarted by the no-show rain, so I am going to have to get the irrigation going to simulate the shower that never was, otherwise I will never get anything planted. I keep seeing notifications on my phone, showing me photos of this day 2 years ago or 5 years ago, and they show scenes of well populated beds, and even tomatoes growing in the greenhouse. So this week it’s got to be full steam ahead, the plants are ready to go, it’s just my bottom that I need to get in gear. Stop press. I got the first 45 tomato plants in the soil inside the greenhouse; I’m feeling a little better about myself now.

The shop is somewhat depleted this week, a combination of the Easter break and the end of season for some items, notably blood oranges and purple sprouting broccoli, and there are no spring greens this week either. There is an addition to the shop though in the form of Little Gem lettuce, they are quite small, but with warm temperatures and plenty of watering they should be ok by the end of the week. Otherwise there is just chard and rocket, the mini plum tomatoes are good cooked or eaten as they are, so great for salads, stir fries or for pasta dishes – wild garlic pesto is perfect for those too. Beetroot, parsnips, carrots, onions, and leeks are available if you fancy a stew or a roast. I am hoping that Portobello mushrooms will be back this week, so I have added them to the shop, but I won’t know for sure until Tuesday. There is a very limited quantity of kiwi fruit, regular oranges, lemons and Royal Gala apples.

Apologies for the problems with the website last week, apparently hackers were to blame. Here’s hoping for trouble-free ordering this week.

There is lots of bird activity around the garden. The Blue Tits are coming and going from the bird box at increasing frequency, so I am wondering if they already have hungry mouths to feed. Likewise with the gas cylinder Robins, they are darting in and out of the nest regularly. Today I discovered a Wren’s nest in a crevice of the brickwork of the back wall of the greenhouse behind one of the fig trees. I have a very vocal Wren for company in there most days, but I hadn’t twigged that it was building a nest in there.

Right I’m going to leave it there because we are out for a family dinner this evening. Enjoy what remains of the Easter break and the fine weather.