I am writing this as storm Ciara rampages across the country, leaving a trail of destruction in its wake. Touch wood and whistle, at this point the level of damage here had been minimal, particularly when compared to some of the images I have viewed on the BBC website – I just watched the side of a guesthouse in the Scottish borders get washed away in a flood! Earlier today I braved the elements to assess the conditions at Moyns Park; I was concerned most about the polytunnel, but by the time I left it was still holding firm. I had to drive round to the rear entrance of the estate because there was a fallen tree blocking the main driveway, and when I arrived the electricity was off, so the propagator was off, but the temperature is so mild that nothing will have been harmed. My brief recce didn’t reveal any serious damage, though the huge sheet of black tarpaulin covering a large section of the lower half of the garden (to supress weeds) had freed itself of its weights and the beech hedge is now wearing it as a cape; but things could be much worse. Emily was meant to be driving back to university in Bath today, but we persuaded her to make the journey tomorrow instead; we’ve get her baking bread instead – it’s a win win situation.

Prior to the storm arriving we had a run of lovely weather perfect for working in. The ground had begun drying out nicely, to the extent that a lot of farmers around here were drilling fields. I got more pruning done, and on Wednesday I cut the grass, because it was getting very thick and tufty. I have now begun sowing seeds in earnest, so the propagator will be constantly full for weeks to come. After receiving a delivery of propane gas to fuel the greenhouse heater on Thursday I am now well stocked up, so that when the seedlings come out of the propagator they will have a gentle warmth to grow on in. As scheduled, the broken pane of greenhouse glass was replaced on Monday, so it’s all cosy and secure again….unless something awful has happened since my visit this morning.

Hmmmm, there is a thief on the premises…..a robbin’ Robin! I have been feeding him a pinch of the kindly donated mealworms that I told you about last week a couple of times a day. He likes them very much. On Friday afternoon the cheeky thing appeared on the bench where I store the array of treats for him, and started stealing some from the bag! I have put a stop to his shenanigans by rolling the top of the bag over and securing it with a rubber band. My stash of goodies for him include mixed bird seed (not his favourite), chicken pellets (yummy), as well as the mealworms. In addition I have a tub of dried dog food for Sky, the beautiful blue/grey Staffordshire Bull Terrier which belongs to Conor the stud manager. Sky comes to visit fairly regularly, for a fuss and a light snack. I also treat Stumpy the scruffy stud pony with a carrot most days to relieve his boredom. Meet stumpy. 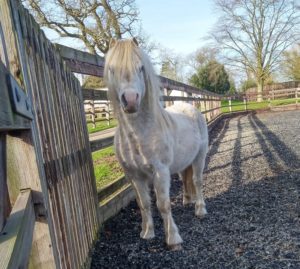 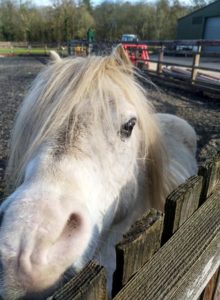 This week I will start cutting the savoy cabbage; they are not large, but the outer leaves are in good condition, so you can use everything. There will also be purple sprouting broccoli, and calabrese. Leeks, beetroot, parsnips, red cabbage, swede, carrots, sweet potato, garlic, ginger and mushrooms complete the veg offering, plus of course potatoes. As for fruit, the blood orange season has just about finished; a few were going soft last week, so if any were spoiled please let me know and I will replace them. This week there will be regular oranges, plus lemons and kiwi fruit.

The wind has dropped considerably here now, it’s been that long since I began writing this – I have been floundering a bit. I’m not a machine you know, and sometimes it take a while for my creative juices to flow; they have already dried up, so I’m going to cut my losses and get outta here. Whilst Ciara may have moved off it looks as though the rest of the week is still going to be pretty windy, so if you are out and about please take care.

I will be at Wyken on Saturday as usual, hopefully I will see you there, or on your doorstep when I deliver your box. Have a good week.