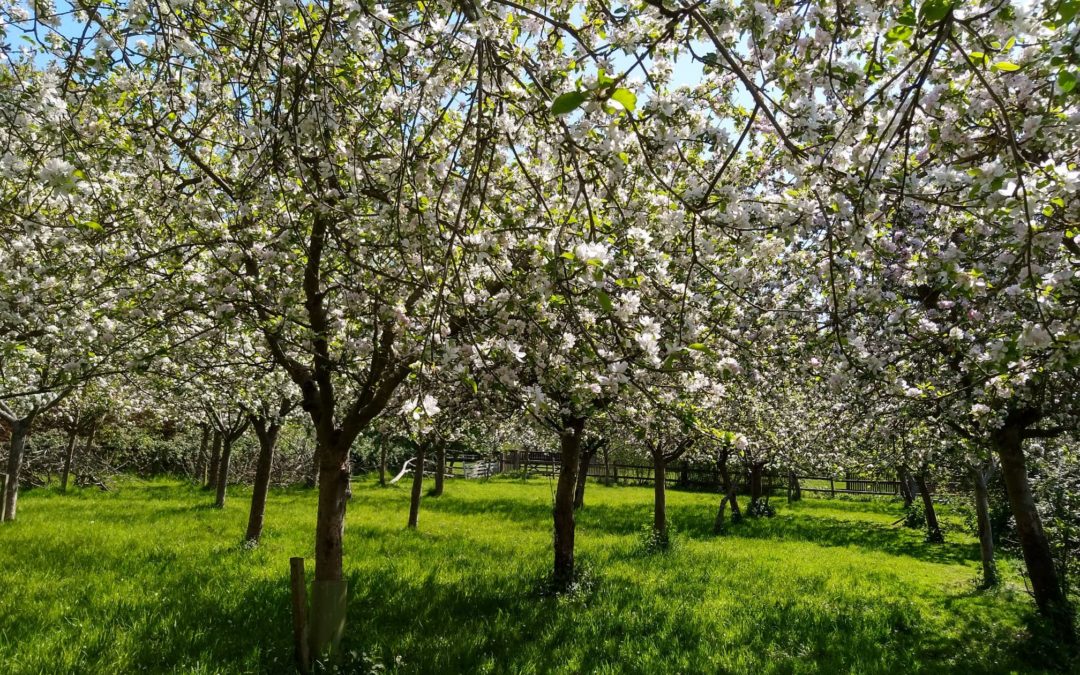 Yep, it was St George’s day on Thursday, and that marks the official beginning of the asparagus season, and so you will find it in the shop this week. I usually get it from Home Farm in Nacton, but after last year’s harvest they ploughed up their beds, presumably for economic reasons; it is a very labour intensive crop. So this year I have had to find another organic grower, and what an appropriately named farm the new Cambridgeshire based one is given the crazy times we are living in – Bedlam!  It will be lovely to have the first tender spears with butter and a twist of salt, yum. 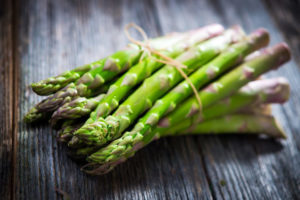 The drought continues, but there is the promise of a drop of rain in the week ahead, let’s hope that it materialises this time. I have to say that it has been a joy working out in weather that has been more like mid-summer conditions than April, and I don’t know if it all this sunshine, or a wet winter, but I have never seen so much apple blossom in the orchard. As I cut the grass beneath the trees this morning, petals were fluttering down on me like natural confetti; there was a touch of frost last night, but I don’t think that it was enough to have damaged the buds. As a precaution I earthed up the potatoes yesterday for the second time in a week, as the tender new foliage has put on a real growth spurt in the past few days. I planted out Calabrese, Brussels sprouts and kohl rabi last Monday, and in the greenhouse there are now 90 tomato plants establishing themselves, as well as cucumbers and some aubergines. 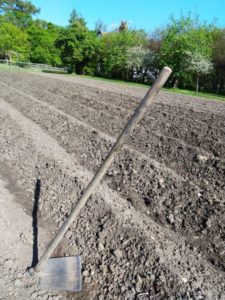 There was a run on lettuces last week, so it really diminished the limited first batch of plants; this week there are around 25 left, which will go to the first customers that order them (1 per customer). When I put ‘very limited’ against an item I really mean it, so if you try to order 6 you will always be disappointed. The first batch of outdoor lettuces will be ready to cut during the week after next. The only leafy greens this week is chard, last week’s cauliflowers were very disappointing when they arrived, so I will steer clear of the dregs of the winter crops and wait for the fresh new season harvest. I thought that the cherry tomatoes were quite nice, so I have ordered more of those, and courgettes. There will be red cabbage, beetroot, parsnips, onions, carrots, garlic, ginger, mushrooms, Pink Fir Apple and Cara potatoes, plus baking potatoes that are generally a little smaller than they have been – now a minimum size of 280g. The dry weather has taken its toll on the wild garlic, so I have removed it from the shop, however I will be able to gather enough to do a batch of pesto with it. I have left chives on the list, but some of them will have flowers on them at various stages of development. There will be kiwi fruit, lemons and oranges.

I had a lovely encounter with a Barn Owl on my delivery round on Friday. I was just turning into the lane to Hunston Green when it appeared before me from the direction of Badwell Ash. It flew just in front of me, only a couple of feet above the van windscreen, and up the lane we went together for a good 50 metres before it veered off to the right over a hedge. The fact that it was out hunting mid-morning suggests that it has young mouths to feed.

Sadly I am unable to confirm a positive hearing of a Cuckoo. I was uncertain about whether or not I heard one last Sunday, so I am not prepared to enter it as a record in my dog eared Young Ornithologists Club notebook, only confirmed sightings/hearings are allowed in that sacred volume. As well as the Cuckoo, the bird that I really want to hear again is the Nightingale, but I don’t know where to go around here to listen to that magical song. I’m going to have to tap up my next door neighbour Chris, I bet that he knows where they are – he knows stuff. He’s a bit tight lipped, so I might need to give him a Chinese burn until he squeals – literally and metaphorically if necessary.

I’m all behind this evening so I’m not going to dally. We had an online party this afternoon via Zoom for my granddaughter Issie’s 16th birthday; the technology is pretty amazing, just as long as your internet connection is reliable, and ours wasn’t, so you get some participants freezing, or stuttering speech, a bit like that old comedian Norman Collier who used to pretend that his microphone wasn’t working properly. Anyway, it was a good second best in these unusual and difficult times to see and chat to family; I can’t believe that she’s 16 already, how time flies.

Thank you for adhering to the new Tuesday evening order deadline…well most of you. I am going to be ruthless in enforcing it from now on; you have been warned.

Have a good week, and enjoy the rain – I know that I will….if it arrives.