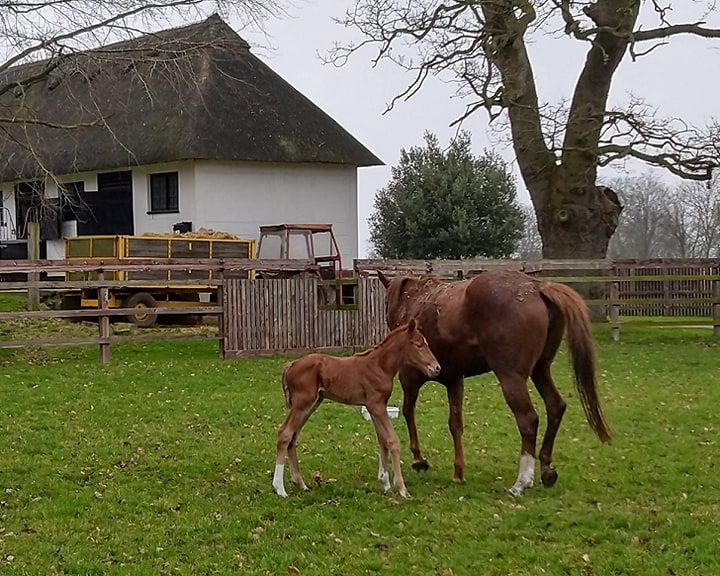 I have started writing this earlier than usual, because the rugby is on this afternoon, and I don’t want anything to distract me from the main event. I limbered up for it yesterday by watching the Ireland/Scotland game; I have to say that the result could have been quite different had the Scots not had Try line fever on numerous occasions. The Six Nations tournament is one of the great sporting highlights of the year for me, I would love to watch some games live, but tickets for matches at Twickenham are as rare as hen’s teeth, and are as expensive as even rarer golden hen’s teeth, so I’ll watch from the comfort of my armchair, or immersed in the warm beery atmosphere of the pub.

On Wednesday morning the first foal of the year was born at the Moyns Park Stud, a beautiful filly. The following morning mare and foal were out in the nursery paddock directly in front of my potting shed for a couple of hours. On that first venture outside the foal was like a limpet, hardly losing physical contact with its mother, but in the days since she has already gained enough confidence to occasionally go for a little dart around the paddock on her own on those ridiculously long spindly legs. It’s a lovely sight, but it’s also very distracting.

Something else that captivated me for a few minutes last Tuesday morning was the magnificent sight of two Red Kites drifting across the sky from above the garden in the direction of the big house. I have seen a single bird fly over the estate on a couple of occasions, but not for 2 or 3 years, so to see a pair of them was very special.

I did a fair bit of pruning in the orchard again last week, but I’m still barely a third of the way through the job. I am being quite severe with some of the trees, removing a lot of wood, particularly from the centre of the trees, this is to allow as much light and air into the crowns as possible. The photo below illustrates the scale of the operation. I don’t want to tempt fate, but I haven’t yet fallen out of a tree, though there have been one or two hairy moments when the ladder has slipped! 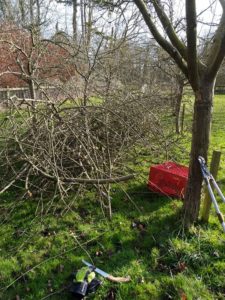 Tomorrow afternoon the broken window in the low greenhouse is finally being replaced. Ages ago I was strimming along the front of the building when a stone flew up and smashed a pane into at least a million pieces. It shattered in the same way that old car windscreens used to. I would have fixed it myself, but I know my limitations, and one of them is not wrestling with a sheet of glass over 3 metres in length….leave it to the professionals. Anyway it will be good to be weatherproof in time for the new season’s seedlings.

The vegetable offering this week has a couple of tweaks from the last one, but is largely the same. There is no kale this week, but I will be cutting some chard, and there will be some sweet potatoes. So there are still Brussels sprouts (I’m still loving them), broccoli, leeks, parsnips, beetroot, swede, carrots, onions, mushrooms, ginger, garlic, red cabbage and potatoes. There will be ‘Cara’ and ‘Javelin’, ‘Pink Fir Apple’ and baking potatoes. Oranges – blood and Seville, Kiwi fruit and lemons are also available.

There is a new film version out at the moment of Dr Doolittle (why?), and sometimes I feel a bit like him. What with all of my encounters with wild creatures, and then there is my faithful companion the Robin, and the stud manager Conor’s Staffie ‘Sky’ who is a very regular visitor to the potting shed. Oh and I mustn’t forget the scruffy short legged Welsh pony which I have named ‘Stumpy’; he has been brought in to excite the mares in advance of them going to a stallion with rather longer legs than dear old Stumpy. He spends his days in a menage just across the track from the nursery paddock looking bored to tears, so every so often I go across to feed him a carrot and have a chat, for which he is very appreciative. As for the Robin, he is being spoiled rotten. On Friday on my delivery round I dropped off a veg box at a customer, and found two bags of mealworms in the returned box. On making enquiries of the donor I was informed that the treats were for my red breasted chum….what a pampered pet!

Another, Doolittle moment came this morning while we were walking Nellie. There is a field close to the river that has a small flock of sheep in it, on several occasions when we have been walking alongside the boundary fence a single sheep has come over to greet us and has loved having its head rubbed. Today it followed us for the entire length of the field, demanding more petting, it even went up on its hind legs once threatening to join us on our walk! Our hearts were melted by the sweet little thing. One of the photos below shows the sheep and Nellie kissing through the fence. 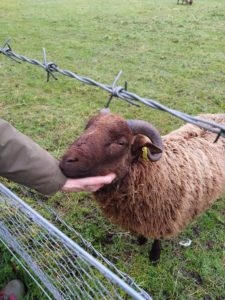 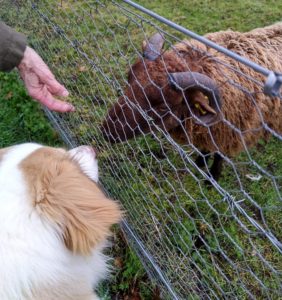 It’s now half time in the rugby and I am not a happy bunny!

It’s full-time, and I’m still not happy, but at least they made a better fist of it in the second half; no Grand Slam again this year.

I will be at Wyken on Saturday as usual, have a good week.