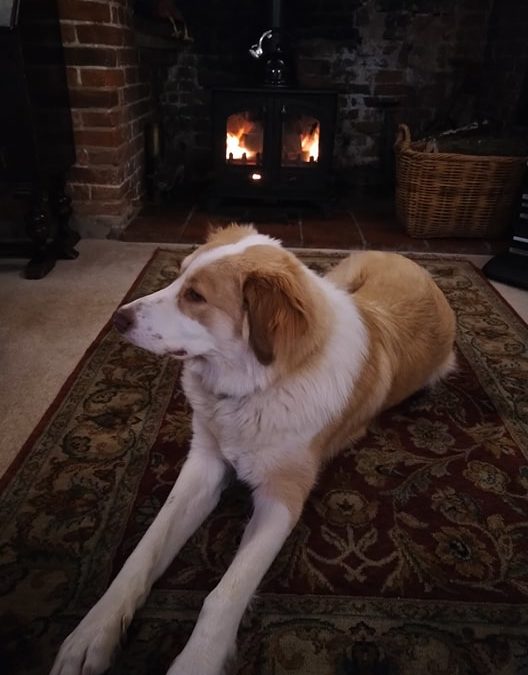 We are back in business! It feels like a very long time since I last communicated with you in this way; I’ve missed you all. Happy New Year. I hope that you enjoyed the festive break; mine was very pleasant, and long enough for me to feel well rested. As you can see above Nelly had a relaxing first Christmas, and was surprisingly well behaved. We were somewhat nervous about how she would be around the tree, and with the presents beneath it, but she was as good as gold.

So it’s a new year, full of optimism and potential when it comes to the garden; I am going to be much better at this that and the other – weed management, pest control, tidiness, thinning out, pruning, record keeping….the list could go on and on. However, I am long enough in the tooth to know that whilst it’s laudable to have good intentions the reality is that real life gets in the way, so one has to be pragmatic otherwise disappointment is the inevitable outcome. So I will try to do everything better, but I won’t wear a hair shirt when I fail. Flipping heck, reading that back it sounds like I’ve given up already!

There is a precedent to my capitulation. I decided that I would do ‘Dry January’, you know, abstaining from the evil drink for the first month of the year; I lasted 4 days! I am not a big drinker, so it’s not as if I needed to detox for health reasons (though it wouldn’t have hurt), but last evening I fancied a glass of beer, and whilst my good fairy was trying to persuade me not too, “surely you’ve got more willpower than that?”, the wicked fairy on my other shoulder was urging me to “go on, if you fancy it have one, it’s not going to do you any harm”. The door was slightly ajar and the wicked fairy was evil enough to hold it open and usher me through. It put me mind of the Snow Queen offering Turkish Delight to Edmund, and like him I was unable to resist temptation. I have lowered my drinking abstinence goal to weekends only now, and in strict moderation – if you can be strictly moderate.

I was delighted by my main Christmas present of a weather station. Long-term followers will have picked up on my constant references to the weather, which is quite natural when your work is so influenced by it. But my interest extends beyond that, hovering close to train spotter territory, though I’m not that obsessed by it. However, the fact that my new device tells me the temperature both indoors and out (max/min), rainfall amounts, atmospheric pressure, wind speed, wind direction, dew point and humidity levels, and that I can’t stop looking at the display panel, constantly updating family members with current meteorological data, suggests that I am straying into dangerous territory. By the way, as I write this the temperature is 6.6 degrees C outside, and the wind is coming from a South/South-East direction. 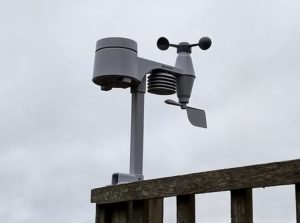 Back at Moyns Park I completed the ‘bus shelter’ before Christmas, and some of my most important pieces of equipment are now tucked away with a certain amount of protection from the elements. However, I have discovered a fault in the design of the structure, in that rainfall is not efficiently running off the roof, so I have had to make some modifications to address this. I’m really annoyed with myself for making such a schoolboy error. 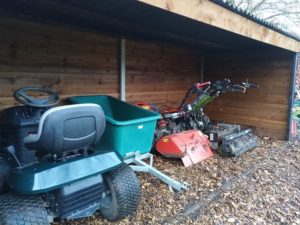 It will soon be time to start sowing seeds for the new growing season, but I am going to show some restraint in starting the tomatoes off this year. In my eagerness to get going I always get ahead of myself and end up with plants that need setting out in the greenhouse or polytunnel long before the conditions are right for them. No, the only seeds that I will be sowing this early are those of onions. I usually grow them from sets, but this season I am going to have a go at producing them from seed. Space is a problem when growing in this way, but by starting now they will be clear of the propagating area before I need it for other crops. I placed my main seed order yesterday; the Christmas break is a great time to peruse the catalogues and agonise over which varieties to select; I am often criticised for quite how long it takes me, but it can’t be rushed. The seed potato order was placed a couple of months ago, and I am expecting delivery of them any time now; they will be put into trays to chit (sprout) as soon as they arrive, and will be planted in March (soil conditions permitting). The top priority for this month is pruning in the orchard, it’s a big job, and one that I can’t put off any longer.

Availability of produce is still somewhat limited post-Christmas, but there is a reasonable selection of seasonal items. Brussels sprouts are not just for Christmas you know, so they remain on the list, there is broccoli, limited chard from the greenhouse and tunnel, red cabbage, leeks, swede, carrots, parsnips, beetroot, squash, garlic, potatoes (including bakers), and mushrooms. There will be kiwi fruit, lemons, ‘Moro’ blood oranges from Italy, and ‘Ave Maria’ Seville oranges for marmalade making.

I would like to thank everyone who generously left me a Christmas box and/or card on the 23rd, it was very sweet of you. Also, thanks to those of you that paid for your order so promptly online. If you are one of the few that haven’t yet got round to it could you please do so.

Everything is back to normal this week, so deliveries will be on your regular day, and the farmers’ market returns to Wyken on Saturday, so collections from there will resume. See you all soon I hope.