This weather is amazing; I have devised a new game based on ‘Where’s Wally’, you know, where you have to spot the boy with glasses wearing a red and black striped jumper in a very crowded picture. My version is ‘Spot the Cloud’, where you scan the clear blue sky for fluffy white Cumulus or wispy Cirrus; in recent days I’ve been frustrated, unable to spot any of the elusive blighters. From Wednesday I will be spoiled for choice, because by then there will be less sunshine and the temperature is set to drop, down to 14° by next weekend. The relentless sunshine has returned my ‘farmers arms’, deeply tanned up to where the sleeves of my tee shirt reach, and I now also have distinct tan lines on my legs at boot top height. I foolishly took my top off for a couple of hours yesterday while hoeing, resulting in very pink shoulders and back. It’s still meteorological spring until tomorrow!

I have been gazumped! After my blog last week about the otter sighting, one of my customers sent me a video clip taken by them last winter. This was still on the river Stour, but a few miles downstream of our encounter. Apparently these can be seen regularly in this location now; isn’t that lovely?

This blog wouldn’t be complete without a bird story…..or two. The first is just to report a sighting. On Friday afternoon I was really pleased to see a Spotted Flycatcher on the paddock rails in front of the potting shed. It travelled its way along the fence, flitting out every so often in pursuit of an unsuspecting flying insect. I used to have them visit me when I was at Langham, so it’s nice to have one at Moyns Park too. Later that same afternoon as I was watering in the greenhouse I could hear a high pitched alarm call coming from somewhere inside the structure. I managed to pinpoint the sound, and it led me to a fledgling Blue Tit right up in the apex of the greenhouse. It was frantically calling to be rescued by a parent, but no help was forthcoming. Every so often it would change its location, desperately looking for an escape route; once it went right down and perched on the heating pipe only a couple of feet above the ground. When I approached it clumsily flew up and rested on a ledge about 10ft up, so I fetched a ladder and climbed towards it. I slowly extended my arm in its direction before making a rapid snatch when I got a few inches from it. After descending the ladder I took it outside and put it in the Lilac bush where I had seen an adult bird a few minutes earlier. I don’t know if the story ended happily, but the baby bird had a much better chance out there than stuck in the greenhouse.

Jennifer brought Nellie to the garden last Monday for a runaround, and whilst doing a circuit of the garden she disturbed a Muntjac deer; you know, the one that had been scoffing the lettuces. Well Nellie charged off in hot pursuit, I followed at a slightly more modest pace, while Jennifer went and opened all of the gates and doors. The creature ran into the bottom right corner, trying to find a way through the wire mesh fence, it then headed up the hedge line but broke cover halfway up and dashed across the garden. Over the course of the next hour we did several more circuits but failed to succeed in herding the deer to safety. And then…..having lost track of it Nellie and I set out to discover its whereabouts; it had been laying low in a clump of comfrey, but dashed out when I came face to face with it. On this occasion the dog was right on its tail when all of a sudden the Muntjac made a sharp right turn and hurled itself into the fence…..and went straight through it! There is now a deer sized tear in the chicken wire netting. Apart from presumably having a sore head, and being traumatised by the whole episode, I don’t think the creature was badly hurt, and it’s now free to graze in other people’s gardens.

There will not be new potatoes this week. As you will have noticed, when they arrived they were not of a size that we normally associate with new potatoes. Frankly they were whoppers! In these days of sheilding I shielded you from the worst of them, so if you thought that the ones that you got were big just take a look at this sucker! it weighed nearly 1kg. My potatoes have recovered really well from the frost damage, and I should be digging them before the end of June, but if some early Cornish ones become available I will buy some of them. The old potatoes are on their last legs now, but I will have some this week, as well as the last of the Pink Fir Apple. 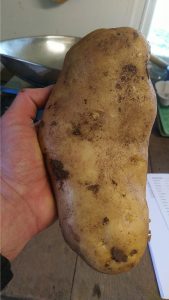 From the same farm that I am buying the asparagus I will also be getting some Tenderstem® broccoli this week. It’s expensive to buy so I’m not getting too much for fear of being left with some. I suggest that you place your order quickly if you would like some. If you go to www.tenderstem.co.uk you will find all sorts of nutritional information about it, as well as lots of interesting recipe ideas. There will be courgettes, summer cabbage, 3 types of lettuce, carrots, onions, mushrooms, baking potatoes are back, garlic, ginger, and large beetroot. I thought the oranges were very good last week, there will also be rhubarb, kiwi fruit and lemons. A limited number of cucumbers will soon come on stream, I cut the first one yesterday for personal comsumption.

Well, are you all having your 6 person socially distanced barbecues tomorrow? Just make sure that you allocate a toilet corner in your garden; the alternative is to deep clean your lavvie after every tinkle, and we all know that isn’t going to happen. Eating a burned sausage while wearing a mask could be problematic, but you’ll work it out….don’t touch your face; particularly after using the outdoor facility. Enjoy.

Right, I’m off to take Nellie for a walk in the evening sunshine.