It was pretty darn blowy on Friday; the polytunnel came through unscathed but the beans were flattened – well lots of them. It doesn’t really matter because sadly they have just about finished. Unfortunately the rain came too late to save them, which is a real shame because they had been going well. Another wind warning has been issued by the Met Office for Tuesday, with wind speeds in the mid 40’s mph again. I hope these unseasonal gales blow through before September 4th, the date that we are going on holiday. We missed out on our week in Cornwall at the end of June, so we booked a cottage in North Norfolk instead. That will mean that deliveries will be a day earlier than usual, because we have a Friday turnover at the cottage. More on the arrangements next week, no need to fret yet…..you or me.

I have been pulling weeds and lifting onions for the past day. Considering how overrun they became I am pleasantly surprised by the yield. Previously I have always grown onions from sets, but this year I grew them from seed, starting in January in modules, transplanting in March, harvesting in August. As you can see below, I now have them drying in the greenhouse, though I still have some more to lift yet. 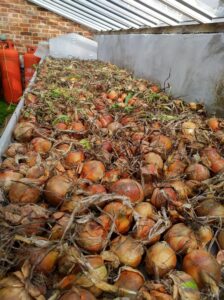 Last Tuesday I donated blood platelets at Addenbrookes hospital in Cambridge. I was surprised to learn that it was my first donation since 2017, though I have given whole blood several times since then. There is now demand for donations of plasma for treating Covid patients too, so the staff in the blood unit are being kept pretty busy. I like to do it, but I always feel a bit washed out afterwards, so it results in a day of light duties when I get back to work. It’s really satisfying to receive a text message some time after one’s donation, saying that the platelets have been delivered to some or other hospital.

I only managed to pick apples last week for the market and veg boxes. I had intended to start harvesting for juicing, but other things got in the way. I will be picking the early varieties this week though, because I don’t want too many to fall, as only those plucked from the tree are suitable for pressing for juice. You can use windfalls for cider, but for juice the fruit has to be sound. If I get the opportunity I will make a small batch of cider this year for personal consumption, though it’s not my favourite tipple, but it will be nice to get the old hand press in action again.

Early last week I received a phone call from the owners of the land where my bees are located, to be informed that one of the hives had toppled over! When I arrived I discovered that said hive was upside down on its roof. I think that the heavy rain of previous days had softened the ground and the weight of the colony had shifted the hive stand just enough to make it tip forward. Bees use a resin collected from trees called propolis to gum up everything in the hive, so actually everything was intact….just 180° at odds to where it should have been. If I was strong enough I could have lifted the whole hive back on to its stand, but it was far too heavy, so I had to dismantle it and rearrange the whole thing. Given the circumstances the bees were in very good humour, and I came away without a single sting. I will have to keep an eye on the colonies though, because there was a lot of wasp activity around them – it’s a bad year for our friend Jasper, and they will rob a hive of its honey if the colony is not strong enough to defend itself.

So no beans this week. There are plenty of tomatoes though, and the red peppers are doing alright at the moment too. Courgettes, patty pan and spaghetti squash continue to produce well, beetroot is plentiful, and there will be some chard this week. Potatoes are Charlotte and Rudolph, the former waxy the latter floury. Mushrooms, lettuce, onions, carrots, chilli peppers, plus limited garlic and ginger round off the veg offering, then there are apples and lemons to make your hair curl, or at least to keep it shiny.

Talking of apples; it’s a pretty good blackberry year, so if you have a favourite picking location I suggest that you get there while the fruit is in tip-top condition. What is better than an apple and blackberry pie….or crumble? I love both. With? It’s got to be custard surely? Cream or ice cream is very good for the cold leftovers.

Please don’t forget to pay your bill online. I know that some of the boxes are getting tatty, so I will be getting some new ones in the next couple of weeks, even though the financial outlay is like a dagger to my heart.

Have a good week, I will be at Wyken as usual on Saturday, but not the following one. There is a great new stall at the market where you can take a bottle to get a refill of washing up liquid, liquid soap, cleaning products of all kinds – and all environmentally friendly; you can even buy a bamboo toothbrush.