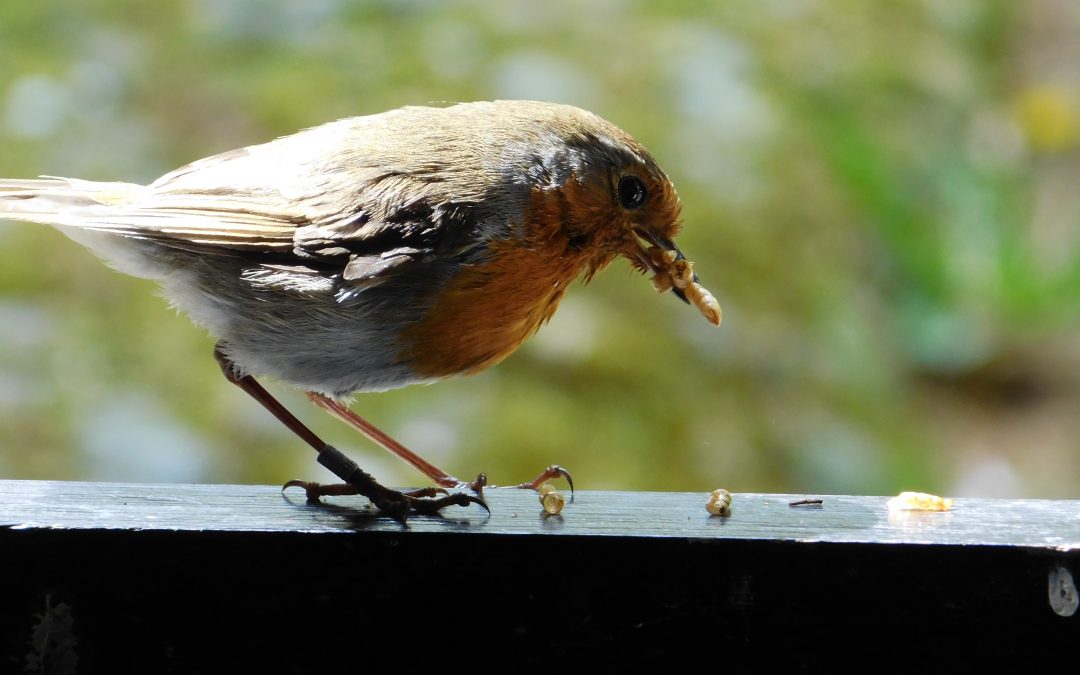 I took the photo above yesterday; Robin was back and forth after an easy meal to feed its babies. I laid a trail of mealworms along the door ledge of the open stable door of the potting shed, it ate several itself, and then it would stuff its beak full and scoot off with them before returning soon afterwards for more.  If the door to the shed is not open Robbie will fly round to the greenhouse and fly through an open door or window and then find its way through three sheds to help itself from the mealworm bag on the shelf next to the door – cheeky monkey! The lighting on this shot is not that good for viewing the ring on its right leg, but you can make out its outline. In better light, and with the camera zoomed in, I wonder if I could make out the serial number on it; if so I could get Barry the birder of Birdbrook to research the history of my friend.

I think there may be a Kestrel nesting quite close by. I am seeing one regularly across towards the orchard, either on the grass, perched in a tree or on a paddock rail. I don’t know where the nest could be, but its presence might be good for controlling the vole population, which last year was out of control in the garden. The cute little rodents cause havoc in the rows of beetroot and celeriac, and I am blaming them for spoiling the peppers in the polytunnel too. Yes, I am quite happy for Kes (one of my favourite films) to keep them on their toes.

The rain came last week and it did a good job. For the most part it was nice and steady, though on Friday afternoon there was a short burst of hailstones, which is not what I want, because it can devastate the apple blossom. Fortunately I don’t think that it was violent enough to have done any harm. I measured about an inch of precipitation, which I am quite happy with. The change in the weather came as bit of a shock, with Monday being a couple of layers colder than the previous day. The week ahead is looking quite promising, with increasing amounts of sunshine predicted from mid week, and warmer daytime temperatures.

The greenhouse is now fully planted for the summer – 2 beds of tomatoes, 1 of aubergines, 1 of cucumbers, 1 of peppers and a border of basil; it’s quite a transformation. As a matter of urgency I have to strip the polytunnel of the exhausted chard and spinach, weed the whole area, spread compost, and start planting the bulk of the tomatoes. We are surely clear of damaging frosts now aren’t we? And the polythene does provide a little frost protection. Last week I prepared a bed for the climbing beans down the bottom half of the garden, so another priority is to get the bamboo supports up for them. Lots to do. After the rain there is a sudden flush of weed seedlings, so the hoe will be hot this week too, particularly amongst the onions and leeks.

There are very few changes in the ‘shop’ this week, but the stored beetroot has finished, the pesto will be Sorrel, and because the ‘Cara’ potatoes have been a bit ropey the past couple of weeks I am getting in some ‘Estima’, which have similar properties to ‘Cara’; I really hope the quality is better, but we are right at the end of the old potato season. There will be asparagus again, and courgettes, cherry tomatoes, mushrooms, carrots, red cabbage, parsnips, chard (we are on to the outdoor crop now), onions, garlic and ginger. Rhubarb, lemons, oranges and limited kiwi fruit will be available. I have included lettuces on the list, but once again they are limited in number; however, there is a batch of loose leaf ones that are tantalisingly close to being ready to start cutting, so if they put on a growth spurt in the next few days the salad famine will be over.

Oh, while I was talking about birds earlier I forgot to mention that I heard a Cuckoo last Monday morning at fairly close quarters; its call was loud and clear. I haven’t heard it since!

So during this period of quarantine it seems that most people fall into one of two camps, fit or fat. I see no end of people making the most of their period of daily exercise, running, cycling or walking, and I know that there is a huge following for online workouts and the like, but I suspect that there is another group whose only exercise is getting up from the sofa to raid the fridge or biscuit barrel before resuming their lounging position binge watching box sets on the telly. This group is very grateful for elasticated waistbands on their leisure wear. As for me, my working life has only subtly changed, so I am mostly fit, with a bit of rubbery stuff around my middle, possibly beer related, because we all have our own way of dealing with this crisis.

Have a good week. It’s a bank holiday on Friday, but as there will not be any street parties I will be delivering as normal, albeit with a bunting festooned van.