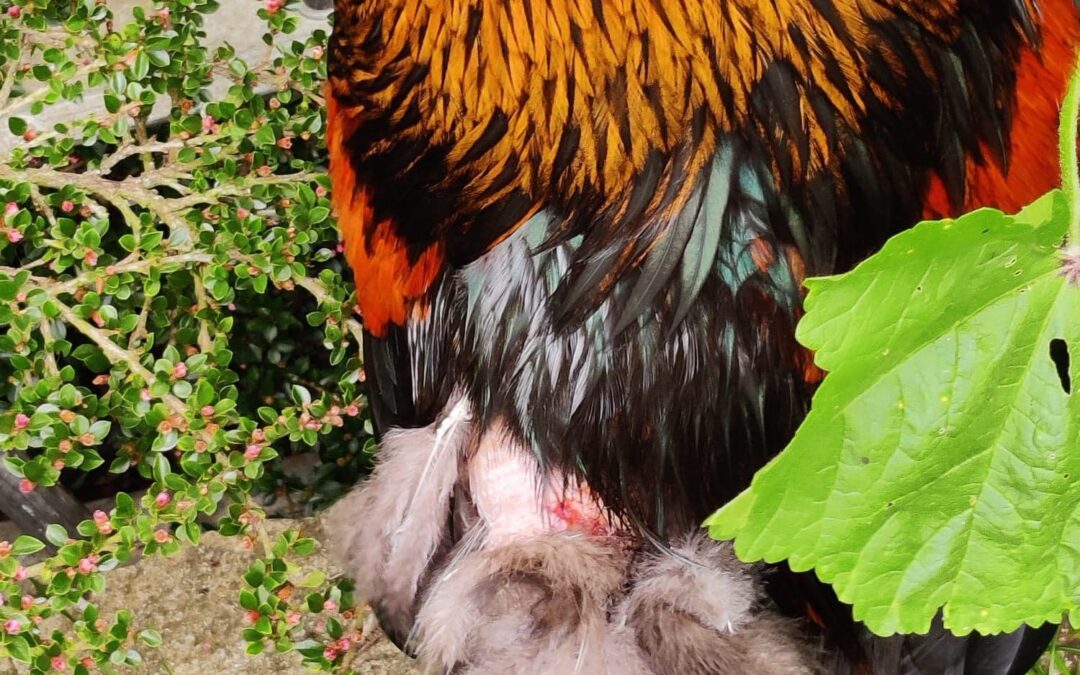 Yesterday morning between the time that I left home for the market, having let out and fed the chickens and ducks, and when Jennifer got up, Mr Fox had paid a call! Feathers everywhere and birds in a heightened state of distress greeted her when she first went to investigate the reason for the commotion in the garden. After doing a head count Jennifer discovered that ‘Little Pea’ our sweet bantam was missing. It could be that she was second prize because there had clearly been a huge tussle between the attacker and Beryl the cockerel. He survived but lost completely his magnificent tail, he also suffered a wound to his rear end, which I have sprayed with an antiseptic that has a purple dye in it to mask the red cut. Chickens are prone to peck at even their nearest and dearest when there is visible blood, and so far the magic spray has worked to avoid that unpleasant behaviour. Since the attack none of the birds have moved very far from the house and are staying very close together. Living literally at the end of the village, with arable fields front and back, I suppose we have been lucky to have avoided a visit until now, but it has shaken our false sense of security because it is so likely that the predator will return, and there is only so much that we can do to protect our little flock. An electric fence may be the only solution.

In case it has passed you by it is Jubilee week, so i hope that you are all looking forward to a jolly good knees up at your local street party, eating curled up sandwiches while singing along to Vera Lynn’s greatest hits (gawd bless ‘er). The real reason for me mentioning it is to tell you that in terms of deliveries everything will be the same as usual. I may be a little earlier on Friday morning, because later on in the day we are going to a music festival in the grounds of Long Melford Hall. I bought the tickets for the 2020 event, but it was postponed twice. The original tickets were for the Saturday of the festival, which is a better day for me, but the event has been moved forward to Friday and Saturday rather than Saturday and Sunday, and the Saturday tickets have automatically been transferred to Friday….keep up. Anyway, it means that I will have limited time to prepare for the farmers’ market on Saturday morning.

The Jubilee holds fond memories for me, because it was in 1977 at the age of 18 that I hitch-hiked down to Cornwall for a 2 week holiday at a surfing school and then stayed down there for the next 3 summers working on the Roseland Peninsula – the place that I go back to every year for my summer holiday. Speaking of which, it is only 3 weeks until this year’s pilgrimage. It was down there that I first experienced market gardening, and look where that got me!

Yesterday afternoon I returned to the walled garden at Langham Hall for the first time in years. I met the current custodians Catherine and Steve and had a good chat and a look around the place. It was really nice to be back there, and good to see what they are doing with the place.  I was pleased to see that the young espalier apple trees that I planted on the east wall are looking really well, and that the globe artichoke bed I established alongside the central path is still looking splendid. The garden is subtly different from when I had it, but I like a lot of what they have done/are doing, the old place is in good hands.

Meanwhile back at Moyns Park I had a setback when my tractor broke down. Terry, the local man who services it for me came to the rescue and discovered that it needed a new fuel pump. The part is on order and I’m hoping to be up and running again later this week. The planting continued last week with cavolo nero and more broccoli going in. I also planted more cucumbers in the greenhouse – some of the first lot that were nibbled by mice have recovered and are now putting on some good growth. The weather forecasters are predicting a cold night tonight, so if you have any tender plants outside you should probably give them some protection if you can. We have been lucky to have avoided any damaging late frosts this spring, let’s hope this one isn’t too bad. I inspected the kohl rabi today and it really needs another week of growth, so it is not in this week’s shop.

I am giving asparagus a week off, selfishly because I want to avoid the drive to the farm to collect it, but it will be back next week. What you can have in its place are broad beans. There won’t be tons of them but I am hopeful that there will be enough for everyone that would like some. Lettuces will be Little Gem and round red ones. There will be Cripps Red apples, kiwi fruit and lemons, but no oranges. Broccoli, courgettes and both types of small tomatoes will be available.

The honey extracting went well last Tuesday evening, it’s the cleaning up afterwards that is a drag; you won’t believe how sticky honey is, and you find traces of it on everything that you touch. The supers (the boxes holding the frames of combs) are back on the hives ready to be refilled. it looks like being a pretty good honey year. The same can be said for apples. A walk through the orchard last week confirmed that it looks like being a bumper harvest this season, provided that we don’t get unwanted summer hail storms or pestilence and disease. Apple juice should be in plentiful supply come early autumn.

Right, I’m off to knit an electric fence. In this special week it’s only right that it should be red white and blue. Have a good week and go easy on the Vimto.