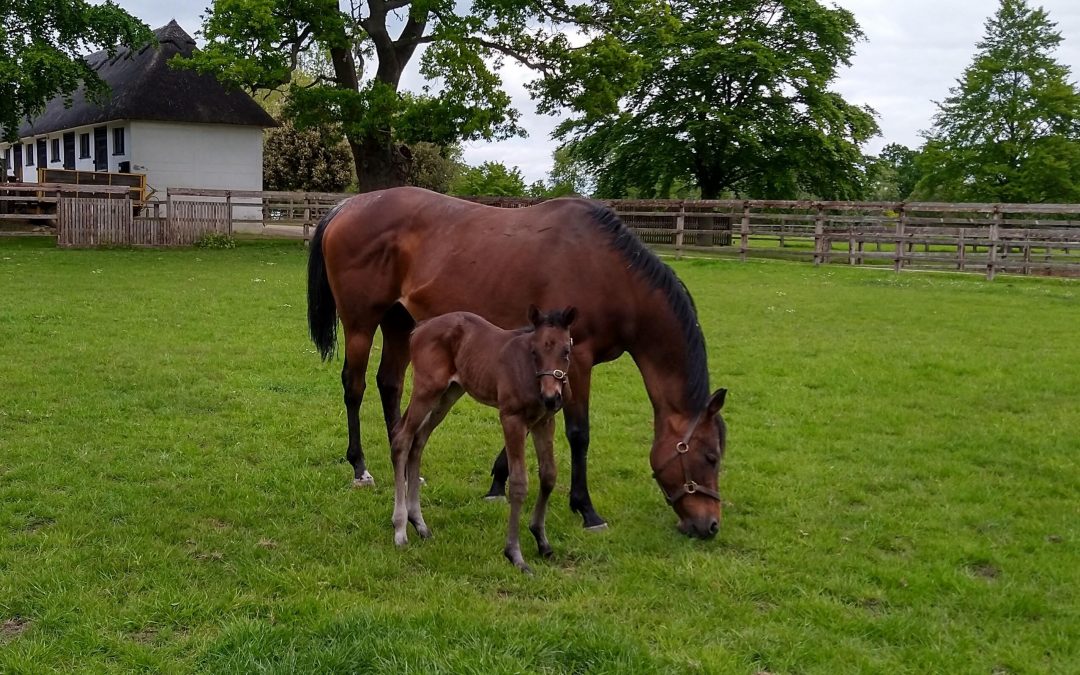 They said it was going to get cold, and on this occasion they were right…..damn their eyes! If you were up early enough you will seen that we had a frost nearly every morning last week, and the one on Monday night did for the potatoes. I had earthed them up twice, but the weather has been so good this spring that the tops were beyond  covering with soil, so they had to take their chance, and they came off second best. They were hit hard, not just one night, but on consecutive ones, and they now look very sorry for themselves. I am hoping that they will recover, but it will have set them back badly, and will probably adversely affect how they yield. The ‘Charlotte’ salad potatoes went in a few weeks after the earlies, so I managed to cover their tops with soil, so they are fine. The sequence of photographs below show the potatoes the week before last, on the morning of the first frost, and yesterday; it ain’t pretty! 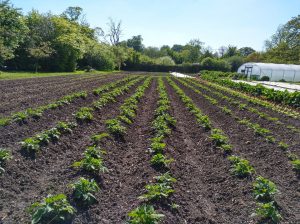 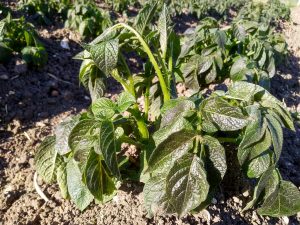 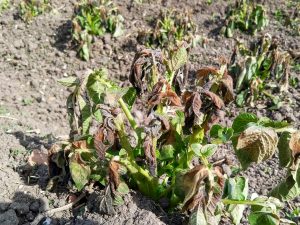 I’m not going to be long doing this tonight, I had a busy day at work planting the runner and French beans, amongst other things, then I came home to work in my own garden, but discovered that I had to divert to sewage duty. Oh the joys of septic tanks, and specifically old knackered septic tanks! The upshot is, I didn’t get as much done in the garden as I had hoped to, swapping garden tools for drain rods. Nice. Anyway, I’m all behind like a cow’s tail, so I’ll rattle this off quick sharp.

This is probably the low ebb in terms of availability of fresh produce during the hungry gap. Thank goodness for our European neighbours, whose climate ensures that vegetables are available when little here is ready to harvest. My cabbages are coming on well, and so is the kohl rabi, but both are 2 or 3 weeks away from being ready, though the warm weather ahead may accelerate their progress. The next batch of lettuce can be cut now, which is just as well, because I lost more than 60 to the muntjac/rabbit/hare. This lot is secure under netting (he says optimistically), so I can offer loose leaf ones and round red lettuces. This will be the last week of chard for some time, but I am delighted that it has carried on until now. Old potatoes are on their way out, they just want to sprout now, but I still have some for this week. For a taste of things to come I am buying some new potatoes from Italy this week; an indulgence, granted, but you are worth it. Courgettes, cherry tomatoes, carrots, beetroot, mushrooms, asparagus, onions, garlic, ginger and parsnips make up the bulk of the list. Kiwi, Lemons, Oranges and Rhubarb are your fruit options.

I’m a bit tetchy at the moment, what with frostgate, lawnmower trouble, missing Robin, losing a bit of filling from one of my teeth, now I’m virtually deaf in my left ear. I’m putting olive oil in it each night, but so far so bad. I’m my own worst enemy though because I won’t leave it alone, constantly rubbing at it and puggling about in it, which I am constantly being reminded is only making it worse. I’m not a good patient, I’m like a bear with a sore ear.

I’m going now, I’m too grumpy to carry on with this, I hope that you find me in better humour next week, until then……grrrrrrrr! This week’s main picture is of a beautiful colt born earlier in the week; he and his mother are right in front of where I pack your veg boxes; see I’m all heart really.