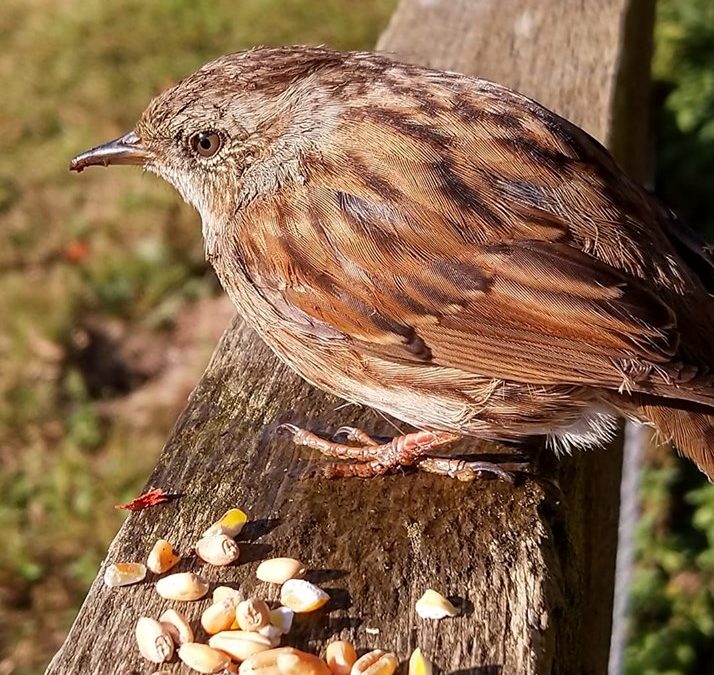 It has been a busy old week on the nature front at Moyns Park since I last communicated with you. It started last Tuesday morning when I took some seedlings into the low greenhouse, only to discover two Dunnocks flitting about in there. My presence made them panic, and they decided that the best way to escape was to throw themselves into the glass of the building. One managed to find its way out through one of the skylights, but the other one repeatedly bashed into the glass until it stunned itself. I picked up the poor frightened bird and took it outside and sat it on the fence, hoping that it would recover from its trauma. I sprinkled some seeds on the fence post next to it, and filled the lid of a honey jar with water, which I sat beside it. For 5 minutes or more it sat there without moving, and I began to fear that it had seriously damaged itself, and then suddenly it flew off into a nearby hedge; much to my relief.

Later the same day I was flail mowing some spent crops on the tractor, and as I progressed down the field dozens of voles scattered here and there ahead of the advancing machine. There are vole holes everywhere throughout the garden, I have never seen so many. I also have them in the greenhouse, in one of the beds that has tomatoes planted in it. The holes and runs pepper the bed, but they cause the plants no harm so I leave them pretty much to themselves. However, once the tomatoes are removed and are replaced by leafy greens for the winter I suspect that my tolerance of my little furry friends may be tested.

On Wednesday evening I set up my trail cam in the orchard, close to the badger latrine. The following morning I checked the camera and was delighted to find a shot of a badger looking straight into the lens, with a deer standing in the background.

To complete my week of notable wildlife events, on Thursday I was invaded by a swarm of wasps in the polytunnel. Jennifer had come to help out, and I got her picking tomatoes, and she reported that there were lots of bees in the tunnel. So many were there, that the sound of them touching the sides of the structure sounded from outside like a babbling brook. On closer inspection I discovered that they were not honey bees, though they looked rather like them; their abdomens were too pointed for a bee, and the banded markings were not right. I have concluded that they are in fact Median wasps, and 3 days after their arrival there are still thousands of them present. I have had the doors open at the top and the bottom of the tunnel, but the silly things do not seem able to find their way out, so I really don’t know how the situation will be resolved; already many dozens of the insects have perished, which is very sad. Quite where they came from so suddenly in such large numbers is something of a mystery.

Preparations for winter produce is well under way. Early in the week I planted a few rows of curly kale in the polytunnel, and a whole bed in the greenhouse is now populated by Swiss Chard, and this morning I pulled out the spent cucumber plants, prepared the soil, and planted 150 lettuces in their place. This week I will be removing some of the greenhouse tomato plants, which have had their day, to make room for leafy greens like spinach and rocket. I will also begin a phased clearing of tomato plants from the polytunnel, because I have spring cabbages to plant in there. It’s important that I get as much in the ground while the soil is still warm and there is sufficient daylight to promote growth. Outside, the kale, cabbages, cauliflowers and broccoli that I transplanted a few weeks ago are getting away nicely, though only because I have irrigated them a fair bit. The area that had the broad and French beans has been cleared and I have sown that whole section with a Mustard cover crop that will be turned into the soil in the early spring.

This week there will be very limited amounts of courgettes and patty pan squash – quite possibly for the last time this season. There will be perpetual spinach, curly kale, leeks, carrots, onions, beetroot, mushrooms, red and green peppers, chilli peppers, ‘Charlotte’ salad potatoes and ‘Cara’ general purpose spuds. Tomatoes are slowing down now, but there are still plenty for now, however we are back to mixed bags. I will be getting some new season organic broccoli this week from the same farm that I am getting the carrots from in the Norfolk Brecklands; that will make a nice change. There will be cooking and eating apples. The sweetcorn hasn’t ripened as quickly as I had expected it to, and the lack of rain has resulted in smaller than usual cobs; I am hoping that there will be some to pick from next week.

The farmers market at Steeple Bumpstead returns this coming Saturday, so Jennifer will be manning our stall there, whilst I am at Wyken as usual.

The week ahead looks more unsettled, with some rain in the forecast, though I’ll believe that when I see it. Whatever the weather have a good week.