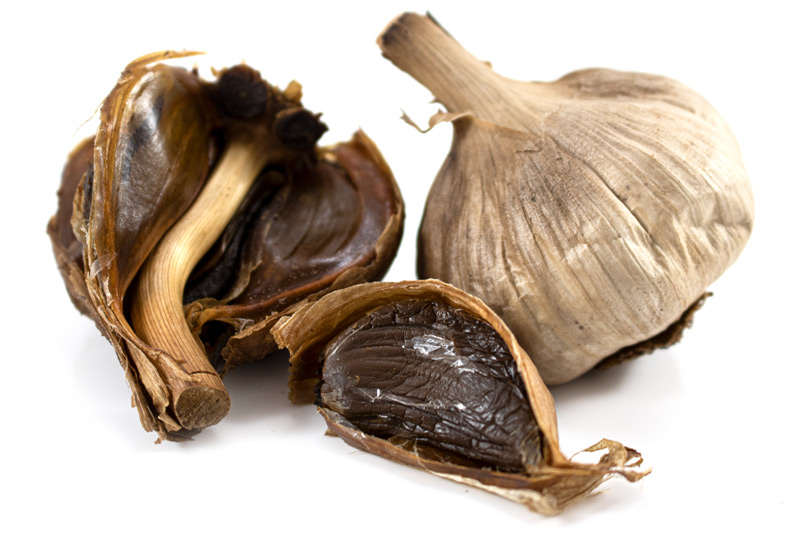 I am not a big watcher of television; sure, there are a few things that I view on a regular basis, but ours is not one of those households where the box is always on in the background irrespective of what’s being shown, so it really didn’t bother me. However, I do listen to the radio quite a lot, so I was miffed when I had a choice of only one broadcast across the BBC Radio network on Friday following the death of Prince Philip. I recognised that there would be extensive coverage given over to the passing of such a significant national figure, and I listened on Radio 4 for a while and learned some things about his remarkable life that I hadn’t garnered from watching The Crown. But after a couple of hours, when I started to hear the same things being repeated, I decided to switch channel for some relief. Now I like Evan Davis, he’s not everyone’s cup of tea, but for me he strikes the right sort of balance in his broadcasting, but I didn’t expect to hear him when I tried Radio 3, and even less so when I thought that I would escape to the peace and tranquility of day 2 of the Cricket county championship on Radio 5 Live Sports Extra. It felt like a throwback to the 1950’s (or earlier) when the Home Service would make grave announcements on occasions like this, followed by the playing of funereal music. Surely one channel on the radio and one on the TV would have sufficed – and I’m not sure that the Duke would have wanted that level of fawning and fuss.

I received a letter last week from the ENT department thanking me for attending my MRI scan appointment, and to reassure me that the scan showed no abnormality to the nerves of my inner ear…..and no abnormality of the brain. The brain?? I didn’t even know that they were looking at my brain! Some may take issue with their findings on that front, but it was indeed reassuring to know that there is no lasting damage to my ear. I don’t know how I would have felt if they had said “your ear is fine, but your brain is a mess”. Once again I can only pay tribute to the quality of service that I have received in the past couple of months from West Suffolk Hospital.

Last Thursday afternoon while filling the veg boxes in the potting shed I looked out of the window and had my best ever sighting of a Treecreeper. Directly in front of the shed is a row of lollypop standard trees, one of which is a lovely Malus floribunda – a stunning garden tree. Well less than 2 metres from my vantage point the dapper little bird was working its way up the stem of the tree in search of bugs in the crevices of the bark. I couldn’t have had a better view with a long lens camera, it was marvellous. The photo below is not mine, but it is a very close representation of what I spotted. 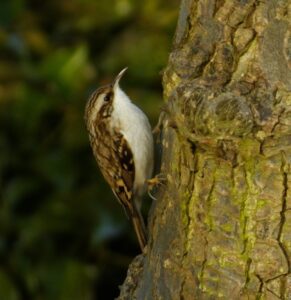 In other bird news, there is still Blue Tit activity in my homemade bird box, but ‘Blossom’ my friendly hen pheasant hasn’t been around for food lately, I suspect that she is off sitting on eggs somewhere. ‘Stumpy’, the cock pheasant lacking long tail feathers is ever present around the side of the shed patrolling his territory, seeing off rivals, and hoovering up spilled seeds under the feeding station. I would like to think that he and Blossom are ‘an item’.

Last week was frustrating in the garden. It was nice and dry, but too cold to plant anything. There were a couple of sharp overnight frosts, and during the day a nagging wind constantly blew that would have desiccated the tender young transplants. -3° is forecast tomorrow night, so I won’t be planting them until that is behind us. Meanwhile in the greenhouse I have prepared a couple of beds for the earliest of the tomatoes; the plants need to go in, so I will risk it on Tuesday I think. It will be at least another month before I consider planting the polytunnel tomatoes. The ‘Little Gem’ lettuce is coming on nicely in the greenhouse, and the first of them should be ready to cut in a couple of weeks. 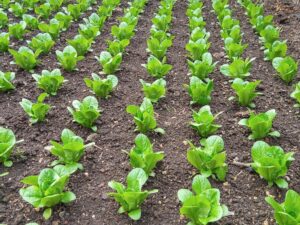 The hungry gap has opened up before us, so the choice of vegetables is very limited, and will be for some weeks to come. One glimmer of hope on the horizon is that it is nearly asparagus season – always a seasonal highlight. I cut the last of the spring greens from the tunnel last week, I have chard/perpetual spinach to pick, and there is purple sprouting broccoli again this week. I think that I like PSB every bit as much as I do asparagus. The UK carrot season has come to an end, so this week the only ones that I can get are new season ones from Italy. I will get in some courgettes and cherry vine tomatoes to liven things up, otherwise it’s potatoes, parsnips, swede, beetroot and onions in the main. The blood orange season is over, so this week I will have regular ones. Until they arrive I won’t know what size they are, so I have listed them at £1.80 for 4, but if they are particularly small I will pop a fifth in the bag, but if they are huge expect fewer than 4. Gala apples, lemons and limited kiwi fruit are your other fruit choices.

Black Garlic. I sold it at the farmers’ market yesterday for the first time, and was embarrassed not to have been better prepared to answer the “what do you do with it?” questions. So I have cribbed a few ideas from the internet to inspire you. Here goes:

I have to say that I quite like number 10 myself.

Right I’m off, I’ve got some logs to split for feeding the wood burning stove tonight. Have a good week.