I didn’t have my Soil Association inspection last week after all, I had to postpone it last Tuesday until May 9th, because on Monday Jennifer was diagnosed with Shingles. She had been feeling unwell over the weekend and managed to get a GP appointment on Monday, at which the diagnosis was made. She has really felt very unwell, so I thought that I should put off the inspection in case I needed to be on hand at home in a nursing capacity. A week on and she is really no better, not helped by being unable to sleep soundly at night because of the discomfort she is experiencing. We are hoping for an improvement in her condition very soon.

It was a case of one step forward and two back regarding the pest control in the garden. On Friday I found an adult rabbit in my live trap, which I released outside the garden in a suitable location. I felt rather pleased with myself, though I’m not naive enough to think that was the only one nibbling my bits and pieces, but I was chuffed nonetheless. Yesterday morning before going to the market I went to the garden to open up the greenhouses and polytunnel having seen full sun predicted by the Met Office. It was whilst doing this that I discovered that I had left the side gate open all night, so I expect that Benjamin bunny came back, and probably brought some of his relatives with him! This morning I found a youngster in the trap, I hope that it manages to find a new home quickly.

My Robins fledged early last week. I was concerned because I stopped seeing the parents going back and forth to the gas cannister with food for them, and after a couple of days I decided to take a look, and the nest was empty. It seemed very soon for them to have gone, but research showed that they can fledge less than 2 weeks after hatching. That same research informed me that the nest will not be reused. Meanwhile up on the moat the first goslings have appeared, fiercely protected by their parents who adopt the head down bottom up position with accompanying hissing if you get with 20 metres of their babies. 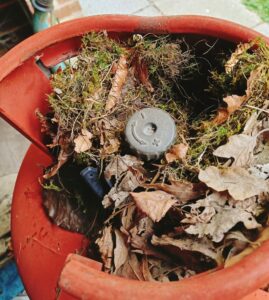 There are going to be some happy birds around the country tomorrow. The avian flu restrictions are being lifted from midnight tonight, so domestic poultry will no longer have to confined to barracks, which is what the rules have stipulated for months. In a backyard setting it felt to me as if the birds were more at risk of getting ill being shut up in a small space together than if they could roam free.

This week will be as normal, but week commencing 9th of May I will not be delivering or appearing at the farmers market at Wyken. I am going to do the same as I did last May and have a week at the garden concentrating on growing. If I don’t get on top of things at this time of the growing season it will all get the better of me and the productivity of the garden will be compromised. It’s also a good time to do it because it coincides with the ‘Hungry Gap’, that period between seasons when there is limited availability of good quality fresh produce. I am hoping that there might be an element of absence making the heart grow fonder, so you will be all excited to see me the following week.

As for the coming week it’s very much one of limited bits and pieces as crops fizzle out, or have to be removed to make way for new ones. Lettuces will make a brief appearance in the shop, but I only have around 25 left, so it’s going to be a case of first come first served, albeit with the caveat that they will be restricted to one per customer. I had hoped that they would have lasted longer but very high demand for them has been seen them decimated sooner than anticipated. I will be digging the very last of the leeks this week too, and I know that there will not be enough to go round, so do order early if you want to secure some. This will be the last opportunity to buy chard until the outdoor crop comes onstream because I need to pull it up to make way for the tomato plants. What I will have is broccoli (calabrese), and a limited number of courgettes from Spain. Parsnips have finished, and I am having to buy some very expensive carrots from France because the stored UK ones are now in short supply and the quality is poor. The Isle of Wight tomatoes will brighten up your plates and are great cooked or eaten as they come. Spuds are Mozart and Pink Fir Apple.

I heard my first Cuckoo of the spring this morning while walking Nellie, two weeks after the alleged hearing by my daughter. I remain sceptical, does she even know what a Cuckoo sounds like? Let’s face it, she’s not the most outdoorsy type, in fact a walk in the country for her is going from the back door to her car! And anyway I’m the one that is in harmony with nature, I’m surrounded by it all year, I love it…..and I should be the one to hear the first Cuckoo! (said stamping his foot).

Right, I’m off to tell the chickens the good news about being allowed out at midnight….you don’t suppose that Mr Fox has heard? Have a frolicing good May Bank Holiday and a lovely week.