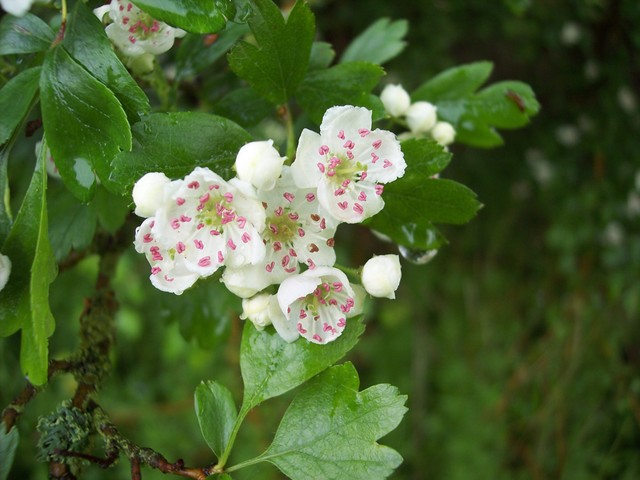 Last week I cast a clout or two before May was out, but now the May is out the clouts are back on big-time. Until Thursday I was still in shorts, but it’s long trousers and warm tops at the moment; it was flipping cold yesterday, it felt more like winter, particularly when contrasted with the balmy conditions over the Easter holiday. The worst of the deterioration in the weather was that it didn’t bring much in the way of rain with it; I measured 6mm, which wasn’t enough. If it’s going to be miserable it might as well do it properly.

It’s not only the May that is blooming, the apple trees in the orchard are in their full pomp, and in domestic gardens I have spotted Lilac, Wysteria and Laburnum flowering in the past few days. The month of May is just a few days away; it’s amazing that four months of this year are already behind us. The Morris dancers will be polishing their bells and oiling their sticks for a busy few weeks of traditional dancing; having enjoyed the event so much last year, I may well go to Thaxted again for the big Morris gathering at the end of the month, it is quite a spectacle.

From previous blogs you may have picked up on the fact my journey to and from work includes the best part of a mile of drive after entering the gates to the estate in Birdbrook. That stretch of private road is like motoring through a safari park of British wildlife. I regularly encounter hares, squirrels, buzzards, roe, fallow and muntjac deer, pheasants, geese, ducks, herons, moorhens, rabbits, woodpeckers, jays, magpies, barn owls, and the occasional stoat and weasel, as well as all manner of other birdlife. Last evening I had to stop to allow a string of seven large deer cross the drive in front of me, and this afternoon a beautiful conker brown fox, in fine condition, darted into the undergrowth and followed the hedge-line parallel to the drive. I feel privileged to experience such magical moments, but you have to have a radar for such things; many people go along that same stretch of track and are oblivious to what surrounds them. Take the time to look around and you will be amazed, and delighted, by what you observe. That reminds me; my next door neighbour happened to be down the lane beyond the entrance to Moyns Park recently, when he spotted a wallaby in a field! This sighting was one of many recently around these parts, and up towards Bury St Edmunds too. For so many to have been seen they must be breeding.

In the garden I had the sprinkler on last week. The hundreds of young plants that I have set out over the past few weeks had barely seen a drop of rain since they were planted, so were badly in need of a drink. The weeds seem to cope with drought conditions much better than the plants that you cultivate, so I have also had to do a lot of hoeing. The carrots and beetroot seeds that I sowed weeks ago failed to germinate because of the dry conditions, so I am going to have to start again. In the greenhouse 70 tomato plants have already established themselves well, with some showing their second truss of flowers. Now that we are on the cusp of May I will prepare the polytunnel for the bulk of the tomato plants as the risk of damaging frosts diminish; at least I hope so, because the foliage of the early potatoes is now 4 or  5 inches above the second earthing up that I gave them. I sowed a double row of dwarf French beans on Tuesday, and the overwintered broad beans are smothered in blossom, so tiny bean pods will soon begin to appear. 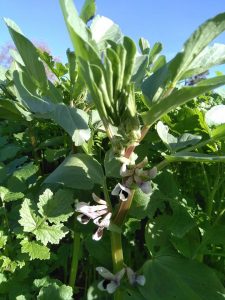 The Pak Choi has finished, but this week I will be pulling radishes from the greenhouse, and I will cut ‘Little Gem’ lettuces from under the glass cloches outside. There will be very limited Purple Sprouting Broccoli, which has held on better than I had expected it to; it will be first come first served. Calabrese, courgettes, beetroot, mushrooms, carrots, onions, chives, parsley, tomatoes and potatoes complete the veg offering this week. As for fruit, there are oranges, lemons and kiwi fruit. Dried pasta, apple juice, honey and pesto are all available. 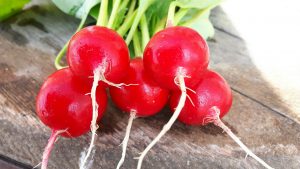 Nellie watch. Our little girl has settled in really well, she is very good in almost every way, and is learning quickly. She has been for some walks in Clare Country Park, she had a check-up at the vets, and has met some visitors at home, all to expose her to as many sights and sounds as possible. The only thing we are still struggling with is getting her together with the cats. There is a mutual fascination, but she gets a little over excited when she gets near them, which unnerves the felines, so we are keeping them apart until Nellie gets sleepy in the evening, when she is stretched out on the floor, and they are perched on the back of the sofas in relative safety. It’s funny that she is like that with the cats when she just walks amongst the hens without giving them a second glance. At the moment she is a bit of a daddy’s girl; she gets beside herself with excitement when she sees me first thing in the morning and when I get home in the evening, which always results in a little puddle. We need to get her a seat belt so that she can come to work with me sometimes. After week one we are delighted with our little bundle of fluff, but had forgotten how high maintenance puppies are.

Bravo to Father Martin Magill for his words at the funeral of Lyra McKee last week, and bravo to the congregation for its reaction to them. The politicians in Northern Ireland needed their heads knocked together, they should be ashamed of their behaviour. As Fr Magill said, it is just such a shame that it took the senseless murder of that young woman to make them come to their senses.

Another long weekend is coming up (they’re like London buses), so treat yourself to a visit to Wyken on Saturday to stock up on some lovely things, and procure some herb plants from me to fill the gaps in your borders while you’re at it.