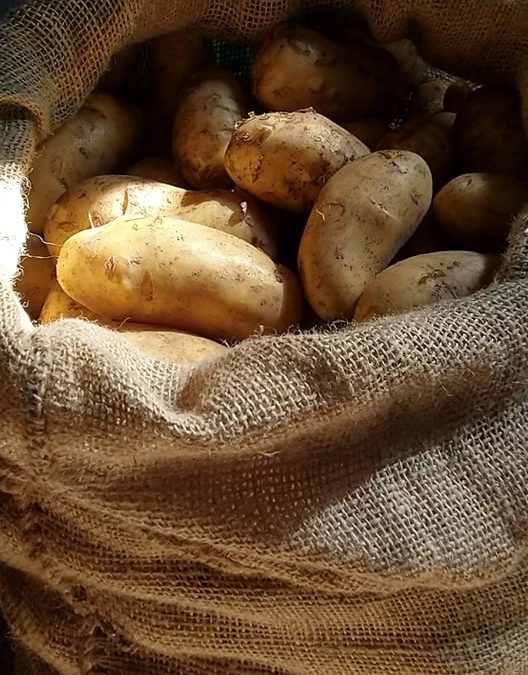 Well it’s not altogether woe is me, but there have been a few setbacks in the garden in the past week or so. The blight on the potatoes is much worse than I thought it was when I mentioned it last week. So far the maincrop ‘Cara’ potatoes have largely resisted the fungal infection, but the ‘Charlotte’ and ‘La Ratte’ have both been badly affected. Fortunately we haven’t had much in the way of rain to wash the spores down into the tubers; the taters themselves are so far blemish free. I have been lifting the tubers that have made a good size, but some of the rows that were planted later are just not large enough yet to harvest. It’s very early in the season to have such a severe infection, and it would be a disaster if the airborne spores got into the tomato crop, so these are worrying times.

The second woe relates to lettuces. While I was away on holiday one of the gates got left open and a hare gained access to the garden. The destructive so and so ruined virtually the entire follow-on batch by taking the middles out of every plant. I counted more than 300 that will not recover. Unfortunately it means that there will be no lettuce ready for cutting this week; another batch will have grown sufficiently by next week for me to harvest. I saw a large hare, with a very swollen belly, leave the garden on Tuesday, and I’m hoping that it hasn’t left any mates behind. I love to see them, but not in my back yard.

Woe number three is all about a beautiful female Blackbird that has become a regular companion to me as she follow me about to collect food for her new brood. During the day when the greenhouse doors are open she hops in to look for insects or worms, which she expertly crams into her beak until there is room for no more. I’m quite happy with that, she is welcome to anything that she can forage, but she’s not stopping at that, oh no, she has decided to peck into as many low growing tomatoes that she can as they ripen. The early fruit is like gold dust, so it’s a little disheartening, but I can’t be too cross with her, she’s such a little sweetie. Below is a photograph taken today of a selection of fruit that has escaped the point of her beak. The problem will go away as the trusses higher up the plant ripen, as they will be out of her reach. 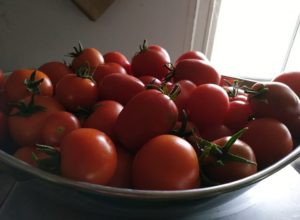 Conor runs the stud farm at Moyns Park, and on Thursday morning as I was weighing up items for the veg boxes, he appeared at the potting shed door to ask me if I had my beekeeping jacket with me? I replied in the affirmative and asked him why he needed it. He had been tidying up the muck heap using the JCB digger, when he disturbed a wasp nest with the bucket of the machine, whereupon a battalion of angry vespas attacked him in the cab. He took numerous stings to all parts of his body, including his head. As soon as he realised what had happened he abandoned ship, jumping from the cab down into the muck heap, in which he sank, leaving one of his shoes behind. The muck heap is close to the main drive of the estate, and that track is regularly used by dog walkers. When he recounted the story to me he said “I hope to god that nobody saw me, they would have wondered what a bare chested eejit Irishman was doing running down the road with one shoe on, whirling his T-shirt above his head”. He returned to retrieve the JCB with my jacket and gauntlets on and fortunately didn’t suffer any more stings, but he still hasn’t recovered his shoe! 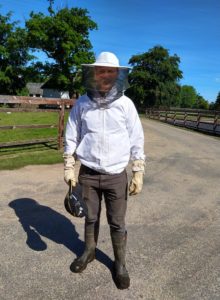 So on this week’s list there is no salad, soz about that, but what is available includes: chard, cabbage, red cabbage, courgette, aubergine, tomatoes, kale, broad beans, carrots from Norfolk, onions, spring onions, bunched beetroot, ‘Maris Bard’ new potatoes, ‘Charlotte’ salad potatoes, mushrooms and garlic. There will be oranges, kiwi fruit and lemons.

Last Sunday I was going to mention the lack of Horseflies this year; as you will recall from previous years, I am somewhat paranoid about them at this time of year, constantly twitching in anticipation of the next sneaky bite. Usually I am plagued by them for the whole of June, but this year I didn’t receive a single bite. As we moved into July I thought, hoorah, I’ve avoided them, only to be zapped on Monday! I don’t want to tempt fate, but that’s the only one so far, though I did splat another when it landed on me prior to it getting its gnashers into me….very satisfying.

Right, I will see you on your doorstep, or at Wyken on Saturday, or not at all. Have a splendid week.