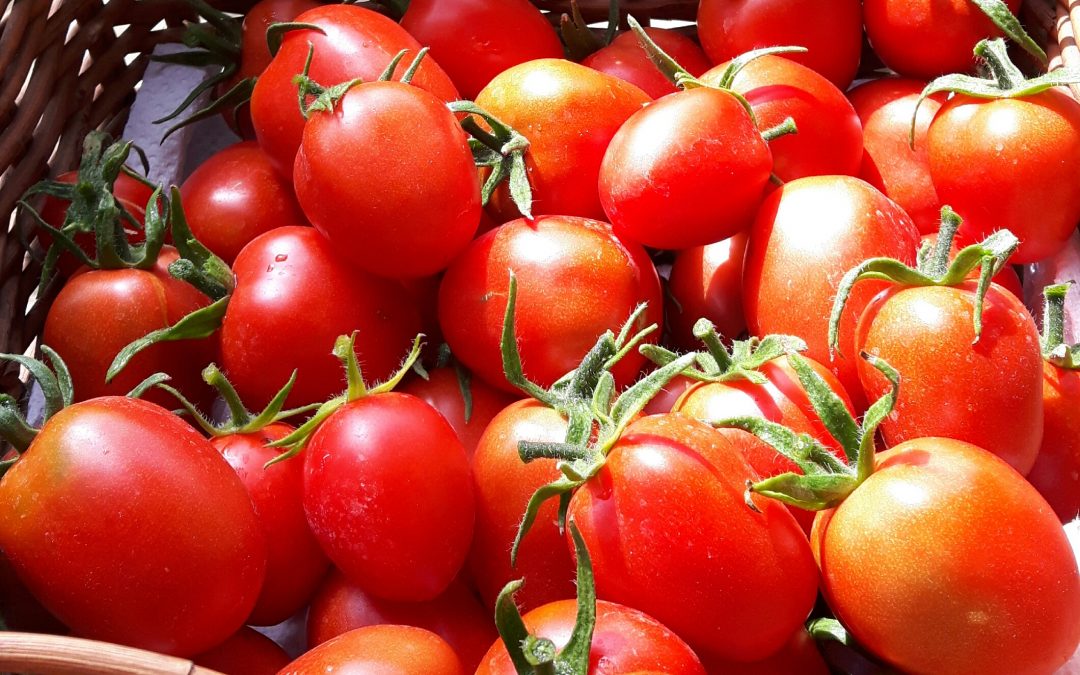 There were some gremlins in the system last week. I understand that quite a number of customers did not receive the usual Sunday evening email reminder. There appears to have been a problem with the email server; I hope that everything works as it should this evening. There also appears to have been some difficulty for one or two of you gaining access to your account. Apologies for the frustration caused by these issues.

If that wasn’t bad enough then there was ‘Tomatogate’. The cherry tomatoes that I have been buying didn’t materialise when my delivery arrived; I had forgotten to order them! That resulted in lots of your order values being different to the amount shown on your order acknowledgements, so you will have to make an adjustment to your next payment. Then the overcast weather of last week put the brakes on the ripening of my own tomatoes, so there was a shortage of them too. Things can only get better.

There could be more complications this week, because I have added climbing beans to the shop this week, but there will definitely not be enough to go round. Even if you are lucky enough to be a recipient of some, I can’t tell you whether they will be French or runner beans. At this time both are in very limited supply, so don’t order any unless you are happy to receive one or the other. Although there aren’t that many quite a few of you will be able to delight in their loveliness. This week I am limiting customers to one bag only, and it will be first come first served.

The improvement in the weather since Friday has resulted in an increase in the rate of ripening of tomatoes in the greenhouse, and outside the courgettes are beginning to produce nicely. I managed to clear some spent crops and cultivated some ground, where I have planted another 240 lettuces and 200 winter cauliflowers. I’ve got some Kohlrabi to get in tomorrow. The weed pressure is relentless, to the point where I can barely see where the onions are growing, and unless I get on top of them soon the same will apply to the sweetcorn and winter squash.

I had an amble through the orchard last week, and I liked what I saw. There is a lot of fruit on the trees, and the first of the early varieties should be ready to pick in 2 or 3 weeks. From then until well into the autumn there should be a constant supply of apples, and the juicing season will also be upon us. How lovely.

I’ve had some feedback on the Padron peppers. The received wisdom is that they are usually just like green peppers to eat, but occasionally one is hot, so there is some jeopardy each time you pop one in your mouth. One of my customers bought half a dozen of them, and reported back that every one of them was hot! I have no way of knowing if they will all be as spicy, but it is clearly a case of caveat emptor; go on, live life on the edge! I will have to try some myself to see if I have the same experience.

So in addition to the items already mentioned there will be pointed cabbages available this week, mushrooms, onions, carrots, ‘Charlotte’ and ‘Colleen’ potatoes, beetroot, garlic, ginger, kale, mild red chilli peppers, limited lettuce and cucumbers. These are slowing down with the affects of the red spider mite, but I am hopeful that there will be enough for all this week.

I don’t view a lot of telly, but last night I was in my element watching a documentary on BBC4 about the Rockfield recording studio, located on a farm in rural Wales close to Monmouth. It was highly entertaining, with some great interviews with the likes of Ozzy Osbourne, Robert Plant and Liam Gallacher. The daughter of the farmer who owns the site recalled that when she was very young, every afternoon the members of rock band Hawkwind would cease their rehearsals to watch Trumpton on the television with her. In true rock and roll fashion there were lots of references to drug taking, and it was very sweary, but if you like rock music I highly recommend watching it on the BBC Iplayer.

Are you all equipped with your designer face masks? I’ve got one, and a couple of neckerchiefs that I will wear cowboy style, but I, like everyone, will have to make sure that I have one with me at all times. Won’t it be annoying to arrive at a shop only to discover that one is maskless? I am now at the stage where I have to take my reading glasses into the shop, otherwise I am unable to read labels, and what I am yet to resolve is how to stop your spectacles from steaming up. Perhaps one of those masks with a valve is the answer. The other thing that I struggle with is hearing what mask wearers are saying. Without realising it I think I must do some lip reading; I just hope that I am nodding and saying “yes” in the right places.

The nights are drawing in. There, I’ve said it. But it’s true; it has become really noticeable in the past week or two. It’s funny how the daylight hours seem to change so much more quickly after the equinox than before it. Before we know it we will be approaching the dark days before Christmas.

I will be at Wyken again on Saturday, but not at Steeple Bumpstead farmers’ market this month. We will not return there until September (there is no market in August).