It’s all happening. It was the spring equinox yesterday, the equilux (equal light) was on Wednesday (also St Patrick’s Day) – the day when day and night are actually equal in length. It’s census day, so you can decide to be a Hare Krishna ex-service person in a same sex marriage who takes the bus to work where you are employed as an apprentice and where your first language is Esperanto…..if you want to. Today is Passion Sunday, which means that it’s Palm Sunday next week. I don’t have religion now (I said as much in the census), but in my boyhood when I was a regular churchgoer I used to love getting my palm cross, and even better, when I was an alter boy we were given long, dried palm leaves that we carried in procession up the aisle, in the style of a soldier resting his rifle on his shoulder. In the vestry we boys would use them for sword fighting until admonished by the choirmaster. Next weekend also see the clocks go forward an hour, which means that a week from today the sun will not set before 7.30; I like that. 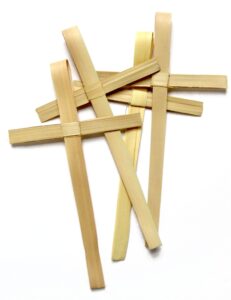 I’ve had the most fantastic level of service from the NHS in the past few weeks. As you know, I have been going to the ENT department for my hearing impairment; well after three appointments they have successfully treated the infection in my ear, and now on Tuesday I am having an MRI scan on it to see whether or not there is anything wrong deeper in the ear. In addition to that I have had a recurrence of my knee trouble following the fall I had back in January. I had a consultation at the orthopaedic clinic last Tuesday, and whilst the doctor reassured me that mechanically the knee is sound, she thinks that I may have a torn meniscus, so after my ear has been MRI’d they are going to do my knee at the same appointment – I can’t complain at that for efficiency. On top of that I had my first vaccine jab last week – the whole procedure ran like a well oiled machine, and I suffered absolutely no ill effects afterwards.

There has been mayhem and destruction in the orchard in the past week. The stud farm is having a hay barn constructed in a patch of scrubland behind the lunging ring, and the only access route is through the orchard, so 4 lovely mature apple trees were unceremoniously bulldozed out of the ground in a mass of torn and twisted boughs and roots. It was a sickening sight, but when it’s not your own land there is very little that you can do about it…..a shame though. 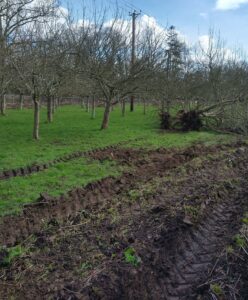 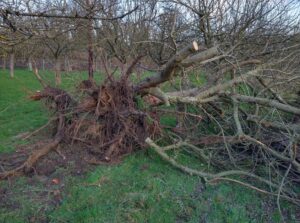 The open ground is still too wet to work on, so I will wait until conditions improve before plating anything outside. Last week I made the last pick of the greenhouse curly kale before pulling it up, cleaning the bed and replanting it with Little Gem lettuce and spring onions. I have more lettuce to plant in the polytunnel this week too; they will have been harvested before it is time to plant the tomatoes in there after the risk of late frosts has passed. This morning I was potting on the first tomatoes I sowed at the end of January, it is these that will be set in the greenhouse next month. The polytunnel ones won’t be planted before mid-May. One job that I can’t put off much longer is the first mow of the grass, it’s getting out of control and will soon be at the point where the mower will struggle to deal with it. As soon as I deem it dry enough I will fire up the Hayter.

Because it hasn’t been that warm in the past week the wild garlic has not put on as much growth as I was hoping for, but because I dangled a carrot last week I feel obliged to go through with my promise to harvest the first leaves to make pesto with. I’m not going to scalp the plants at this stage of their development, so it will be in limited supply this week. Be patient, there will be plenty more in the weeks ahead.

Cauliflowers make a comeback to the shop, and there will be spring greens again. Carrots will be washed ones this week rather than the soot black dirty ones last time. There are courgettes, sweet potatoes, and this week I am trying some Spanish cherry tomatoes on the vine. The winter root crops are hanging on in there, though clearly not at their tip-top best at this time of the year, however, there are still parsnips, swede and beetroot, onions and red onions. I jumped the gun last week regarding the blood oranges, they are available for at lease one more week; they are small so I have reduced the price. There are lemons, and Greek kiwi fruit as well as Gala apples.

Thank you for your comments on the Black Garlic, I have given Giuseppe some feedback and am now waiting to see when I can expect the first batch from him – watch this space.

Trees and hedgerows have burst into life in the past week, with members of the Prunus family showing off their spring best clothes. There is a good show of Blackthorn, and some of the early flowering ornamental cherries. Forsythia, flowering currants and vibernums are cheering up gardens, along with the spring bulbs and primroses. At the base of hedges the bright buttercup yellow of Lesser Celandines demands attention beneath the vibrant bursting foliage of the hawthorns. Such a positive time of the year, and don’t we all need that after the last 12 months? Don’t forget that you can (officially) meet a friend on a bench for a chat and a cup of coffee now…..go on, do it!