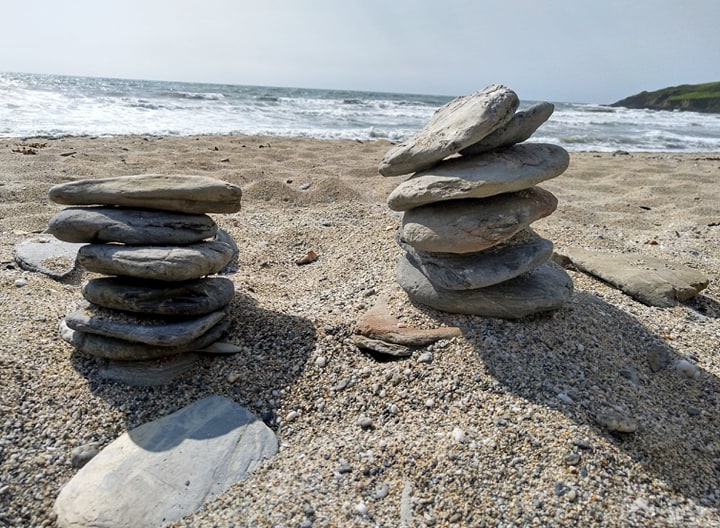 I’m back! Did you miss me? I do hope so. The holiday was everything that I hoped it would be; relaxing, interesting, energetic, fun, restful, thought provoking, and with Nellie in tow it was fairly chaotic at times too! The weather was generally good, with only one miserable day, and even that wasn’t as bad as we were expecting. Lots of dog walking, beach bowls, swimming in the sea, kayaking (I capsized), rock-pooling, meeting up with old friends, garden visiting (Trewithen this year), cream tea, ice cream, clotted cream, sun cream. One evening we had pizza on the beach from a van that comes once a week that has a wood fired oven in it. After finishing our grub we were strolling on the sand when Emily discovered a huge Barrel Jellyfish washed up by the waterline. It must have been at least 2 feet across, with very pretty purple fluting around its edge, and had very long tentacles visible through its clear body. The first photograph was one taken by Emily, with a water bottle beside it to give an idea of its size, the second photo is how it looks in the sea. It’s the largest species of jellyfish found in UK waters; sad that it was dead, but good to see nonetheless. 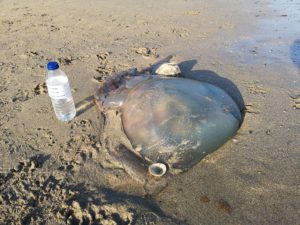 Nellie made lots of friends throughout the week – mostly by throwing herself onto her back at the feet of every dog and human that she met. She obviously decided that squirming and grovelling was the best policy, and in most cases it worked like a dream. She was a flipping liability on the beach though; she became selectively deaf to any command from us, and took off across the bay after every dog that she could find, before introducing herself to all of the nice holiday makers one by one, usually distributing copious amounts of sand amongst their picnics. Understandably we were on the wrong end of a few scowls as we darted between windbreaks to collar her. In the end she had to stay on the lead at busy times of the day, only having freedom early in the morning or in the evening when only dog walkers are on the beach; but boy did she love it. 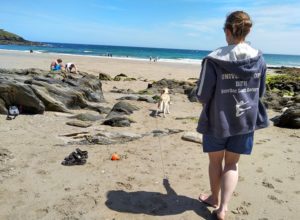 The return journey from Cornwall was fairly slow, due to numerous sections of roadworks (almost exclusively lacking workers), and a couple of accidents that resulted in tailbacks, so we didn’t get home until nearly 9pm. It was just as well that I had already decided against doing the farmers’ market, as I wouldn’t have had time to prepare for it. In my absence Margaret did a great job of keeping everything going in the greenhouses, and fortunately for her (and me) the scorching weather didn’t arrive until the end of the week. I was surprised at how much growth the tomato plants put on in a week; I have got an awful lot of side shooting and training to do in the next couple of days, but the good news is that the first few fruit are beginning to ripen. Less encouraging is that some of the potatoes have been infected with blight, so I am going to have to keep a close eye on them, and will probably have to cut off all of their foliage to prevent the infection travelling down to the tubers; I really don’t want to lose the crop at this stage.

Everything is back to normal this week, so orders in by Wednesday evening please, and deliveries will be on your usual day. I will be back at Wyken on Saturday.

The next batch of broad beans is ready for picking now, there is chard, cabbage, red cabbage, courgettes, new season carrots, onions, lettuce, spring onions, garlic, chives, plum tomatoes, mushrooms. New potatoes are larger now and the price has been reduced. There will be a very few cucumbers, so to be fair to other customers please don’t order multiples, and it will be first come first served. There are lemons, oranges and kiwi fruit.

On Tuesday my root canal treatment begins, and I’m not looking forward to it! I’m going to have to be a very brave soldier. Last Tuesday the temporary filling that was put in my aching tooth a few weeks back came out. Fortunately it didn’t result in any sensitivity or pain, it has just become the perfect food trap.

Right, I had better get a move on, I need to cut some grass in the home garden – it grew like topsy last week.

Enjoy the nice weather, it looks set fair for the foreseeable, and thankfully not as hot as yesterday……scorchio!