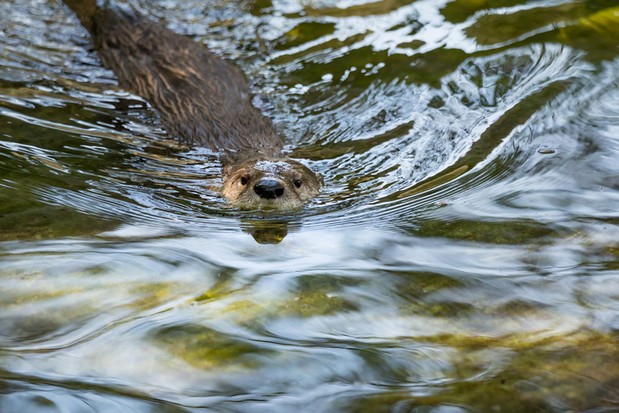 If you have read my blogs for long you will know that I have had lots of wonderful encounters with wildlife over the years, but last Monday evening I had one of the most exciting I have ever had. I had dropped off my van at the garage in Clare for some maintenance the next day, and Jennifer, Emily and Nellie came in the car to pick me up. We decided that we would go for a walk in the country park, but opted to take the path on the opposite side of the river before dropping down into the park via the old railway line. We approached the sluice gate at the site of the old mill, where the water cascades over a drop of six feet or so into a wide and deep pool below. Jennifer was just ahead with Nellie, when I said to Emily “a great big fish just surfaced over there”, pointing to the boiling water below the weir. Moments later it was clear that it hadn’t been a fish at all, because right before us the head of a very large otter appeared and swam towards us! We had a great view for several seconds before it spotted us, arched its back and dove beneath the surface of the river. It was a magical moment to have experienced; it was the first time I had seen an otter in the wild. As we walked away from the scene we were met by a very animated man who lives in the house overlooking the Stour. He and his wife were in their garden when our otter swam up the old leat that had once fed the water wheel right in front of them, obviously making its getaway after being spotted by us. What a treat. The photograph above was not taken by me, there was no time to take a snap, but I chose a photo that looked very much like the view we had of the magnificent creature.

As if that wasn’t exciting enough, I have news to impart. Yesterday and today I have seen a pair of Robins within 15 metres of the potting shed! Now I’m not getting ahead of myself, because I have not yet been able to confirm whether or not one of them has a ring on its leg, so I don’t yet know if it’s my companion. Could it be that she has been sitting on her nest since I last saw her, and that she and her mate are now on feeding sorties? Or is the second bird a replacement if she perished? I will report back when the puzzle is solved.

I cleared the polytunnel last week, spread compost and rotovated it, all in the full sun and searing heat. The perspiration was dripping off me, but I was determined to complete the job. Yesterday and today I have been setting up the drip irrigation system and have planted peppers, cucumbers, and so far 100 tomato plants; I have a further 50 to get in tomorrow. In the greenhouse the tomatoes I planted a month ago are putting on good growth and have formed trusses of green fruit, and the first small cucumbers are forming on their vines. Outside the potatoes are recovering from being frosted, and the beans I planted last weekend seem to be establishing themselves, though some of the French beans were nibbled off by my rodent intruder. Of course everything is desperate for rain, but there is none in the weather forecast, so lugging hosepipes it is.

This week there continues to be asparagus available; I probably won’t continue to make the trip up to the fens to collect it for many more weeks, so make the most of it. I am going to cut some of the summer cabbages early, before they have hearted, so they will be more like spring greens weighing between 400 and 500g. There is still some chard for this week, but it really is the last hurrah. The plentiful lettuces will be the same as last week – loose leaf or red round ones. There are carrots, onions, parsnips, large beetroot, mushrooms, courgettes and tomatoes. There are limited ‘old’ potatoes, Pink Fir Apple, and new ones too. I was pleasantly surprised at how nice they were. There will be rhubarb, lemons, kiwi and oranges.

Well that went well. I am referring to this evening’s daily briefing from Downing Street. I found the whole thing very uncomfortable, embarrassing even. If the allegations against Svengali are true there is no way that he should still be in post, and it’s an insult to the British people for the Prime Minister to state that Cummings acted responsibly, that’s just piffle! Another thing that astounded me was the way in which the journalists asking questions were dismissed, to the point where they were muted to prevent our leader from being given an even harder time, surely that’s not how we operate in democratic liberal Britain? In my opinion Boris has seriously got this wrong, and you have to question his judgement in taking the position he has. Whatever hold Cummings has over the PM it’s serious, and very worrying. It has reminded me of the snake in the animated Jungle Book film; it’s as though Cummings has mesmerised Johnson in the way that Kaa did – he even looks a bit like him! I know that you won’t all agree with me on this matter, but for me this is too important a moment to let it pass without comment.

The weather for the week ahead is looking lovely again, I hope that you get to enjoy it; I just hope that the overnight temperatures are not as high as some of those last week, it was uncomfortably hot in bed. Walks in the countryside are a treat at the moment, the landscape looks stunning, and you never know what you might happen upon.