Sighing and a sobbing

Only a week after featuring my faithful companion of at least 18 months as the main photograph on my ‘Compost’ blog last week, I have to report that my darling bird has not been seen since Monday. I have called to it (he/she normally responds to a call), I have left little piles of food in its favourite feeding locations, and I have searched its territory to no avail. I fear that it has been predated, which has made me feel like sighing and a sobbing. I researched the behaviour of Robins around breeding time, and even if it is a female bird sitting on eggs she would still leave the nest to feed every so often, and given that she knows where to come for a fast and easy meal I would have thought that I would have seen her. Interestingly, I have not seen its companion either; in recent weeks it has never been far away, though no where near as bold or confident as ‘Robbie’. I hope that I am wrong, and that I can report glad tidings in a future blog, but at this moment I fear the worst.

I was having the day off today, because the weather forecast predicted the arrival of a cold front, with grey skies and a dramatic drop in temperature, so I felt confident that everything could look after itself for a day. This morning dawned bright and warm, and by coffee time the temperature was 17 degrees and still sunny, so I decided that I would have to go and water the greenhouses. While I was there the cold front arrived, the temperature dropped by 7 degrees, and the sky became steel grey. However, it had got very warm under glass and the plants were in need of a drink. Before leaving I decided to inspect some of the crops, and was disappointed to see that the middles had been chomped out of a dozen or so lettuces. A few days ago I thought that I saw a rabbit or a young hare down the bottom half of the garden, and yesterday while working in the same area I noticed some Muntjac deer hoofprints, so there were two contenders for chief lettuce muncher. I took a tour of the perimeter of the garden to see what I could see, and lo and behold in the far right hand corner was a Muntjac! Well, for the next hour it led me a merry dance. I chased it this way and that, ushering it towards the top of the garden where there were 3 gates open, and each time I herded it in that direction it totally ignored freedom and bolted back down the bottom, whereupon the whole procedure started again, and again, and again; the veins in my temples were pulsating and my face was as red as a beetroot. I must have completed at least 10 circuits of the garden, and then I lost track of my quarry, so after a further 2 laps without seeing it I am hoping that it exited stage left without me spotting it. Another inspection of the lettuces tomorrow morning will give me a clue, but if there is also a rabbit/hare in residence it could be that it  is responsible for the damage; alternatively, I could be fighting on two fronts.

Before this morning’s episode I was going to tell you that you can now go lettuce crazy, because there are plenty of them, and I remain hopeful that this will be the case, but another few nights of carnage could change all of that. Let’s be positive though, so with fingers crossed I am going to announce that you have the choice of frilly loose leaved lettuces, or a dark red little gem type. Beetroot returns this week, but red cabbage has finished for now. Asparagus continues and there are still courgettes and tomatoes. Carrots, onions, mushrooms, chard, garlic, ginger, limited parsnips and potatoes make up the rest of the list. The ‘Estima’ potatoes of last week were in much better condition than the last couple of weeks of ‘Cara’, so we will continue with them. I base my buying of produce on previous levels of demand, and so last week I bought the same amount of Portobello mushrooms as I normally do, but for some reason you went crazy for Portobellos, so I’m afraid that some of you missed out, apologies for that. As for fruit, there will be kiwi, oranges, rhubarb (though really a vegetable), and lemons from Sicily – they are HUGE. Most of them weigh upwards of half a pound! I don’t think that you will need many of them.

Look what came up on one of the Facebook groups that I follow. This is a photograph of Great Bardfield church choir, taken around 1970 I reckon. I am the angelic looking boy located between the 5th hat on the right, and the boy wearing spectacles. For a village church this was quite an impressive choir. As well as being in the choir I was also an alter boy, and once I gave a reading at one of the big Christmas services. I even got my Royal School of Church Music medal, in fact I may have had 2, I recall one with a blue ribbon and one red; I wonder what happened to them? I know that the photo is not all that clear, but you may be able to see that most of the boys have the same pudding basin hair cut; my dad’s best friend used to come to our house to do mine – he wasn’t a barber! By the time I was 14 the Church had lost me, but back when this was taken we had great fun, sniggering in the choir stalls during Communion, digging each other in the ribs and making up names for members of the congregation filing past us. The Choir Master used to take a car load of us boys to Tottenham to watch the football, so that was something of an incentive to keep attending. At the first game I went to I saw Jimmy Greaves score 2 goals – much high pitched boy soprano cheering ensued. 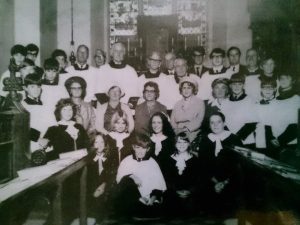 The majority of customers are now paying online, for which I am grateful, but I would just like to remind you to keep on top of your payments please; it’s easy to lose track of what is owed. Also, thank you for observing the Tuesday order deadline, it’s a terrific help.

While the sun was shining and the temperature was 20 degrees, I made an inspection of the bees yesterday. They are all doing well, and this week I will be extracting the first honey of the season. It’s important to get the first batch off as soon as it is ready, because at this time of the year there is inevitably some oilseed rape nectar in the combs, and this crystallises very quickly, so haste must be made to avoid solid honey that will not spin out of the honeycomb cells when put into the centrifuge. I hope that I have caught it in time, the drop in temperature won’t help; I will report back next week.

Have a good week, you might have to get your winter coat out again.