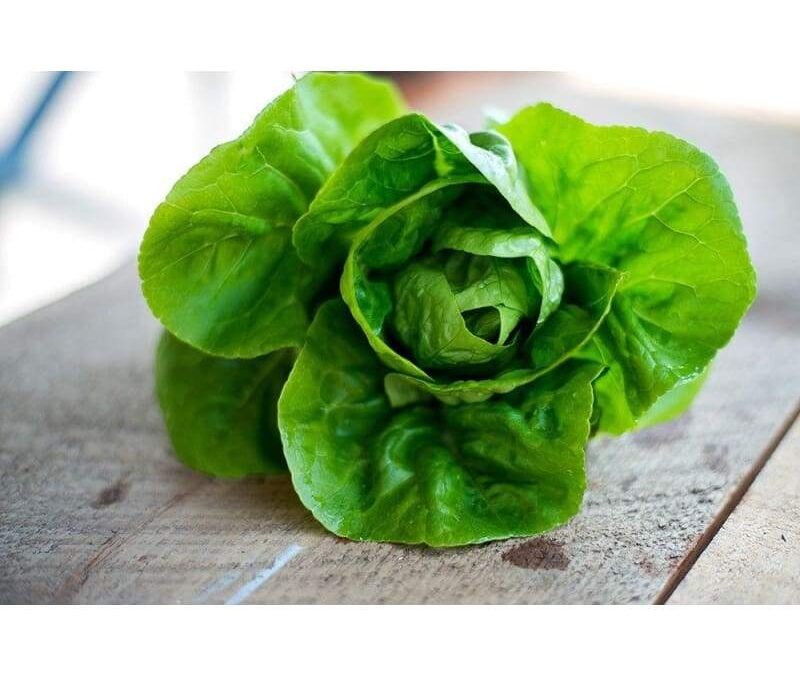 I can’t recall an April such as this one; there have been frosts every night for well over a week now. It’s by no means unusual to have frost at this time of year, but less so to have such a consecutive run of them. Slightly more predictable has been the sustained drought we are experiencing, because this year is pretty closely following the pattern of the last few springs, where a wet period has been followed by a prolonged dry spell. It seems churlish to complain about the lack of rain when I spent months moaning about too much of it – such is the life of a grower.

Whilst it has been too cold for anything much to grow, I did transplant cabbages, kohl rabi and lettuce last week, purely because the young plants were getting stressed in their little module cells, so better give them a fighting chance outside than waste them waiting for perfect growing conditions to arrive. I covered them with fine netting, which will offer a tiny bit of protection, and the long periods of sunshine during the daytime will give them some encouragement, but mostly I suspect that the plants will sit there and do very little until the overnight temperature increases. I also direct sowed some carrots and beetroot last week, but had to have the irrigation on before being able to create a seedbed.

In the orchard the apple trees are sensibly keeping their fruit buds tightly closed to protect them. I had a ‘memory’ come up on Facebook on Friday showing a photograph that I took on the 16th April 2017 showing the trees in full bloom. This morning I took the photo on the right to show how much further behind the season is this year by comparison. 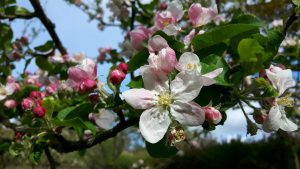 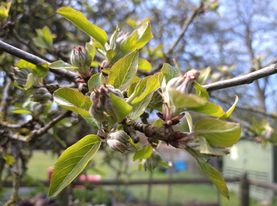 Well that ‘hungry gap’ I spoke of is well and truly upon us. The purple sprouting broccoli has finished and there are no other green vegetables available – well not any from the UK. So apart from courgettes the only green thing available this week is the chard/perpetual spinach from the polytunnel, and that is pretty limited. There are still most of the winter root crops available, though no swede. Do you want some good news? You could all do with some good news I reckon. Well, I think the ‘Little Gem’ lettuces are going to be large enough to begin cutting. They’re not all that big, but I would rather start cutting them when they are in top condition – they are limited, so don’t go daft. Exciting though eh? I have also found a limited quantity of red baking potatoes, so they will be available on a first come first served basis. There are no kiwi fruit this week, apples are also in limited supply, there will be lemons, and the oranges are from Italy.

I had a treat on Friday whilst on my delivery round. I have seen a Barn Owl in and around Hunston a few times, and once again there it was, flying a short distance ahead of me just above hedge height. All of a sudden it deviated from its course and disappeared at speed into a hole in a gnarled Oak tree. I wonder if it already has young, or perhaps feeding its mate sitting on eggs? I will keep a close eye on the tree in question each time I pass it.

I received some sad news today from Tony who works on the stud farm and who lives in one of the cottages that overlooks the market garden. On Friday he learned that his lovely Bengal cat had been hit by a car and killed on the lane close to the rear entrance to the Estate. The crazy thing is, he had 450 acres of land to roam but still found it necessary to walk half a mile to cross the road to go hunting. The local wildlife will be relieved, because he was a very efficient killing machine, but he was a nice boy who sometimes came into the greenhouse or shed for a visit. I will miss seeing him slinking around the place so very gracefully, and hearing him wailing a greeting to Tony and his son when they arrived home. This was him in the greenhouse……dear Khan. 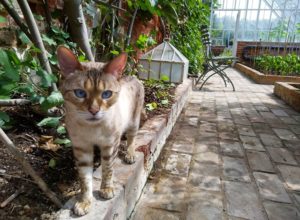 I had my telephone appointment with the physiotherapist on Friday; he has designed a programme of exercises for me to do to strengthen the muscles around my knees. There will be a follow up appointment to discuss the progress (or not) in a month, by which time I should have knees bulging like Popeye’s biceps!

The weather is obviously suiting the Blackthorn, there are absolute clouds of blossom in the hedgerows this year; ti could be a vintage year for sloe gin – I’m sure that’s incorrect terminology, but you know what I mean.

Ok that’s me done. I’m off to lay on my back on the floor and raise my legs in the air. I hope that you have an enjoyable week visiting shops, pubs, coffee shops, or just staying at home. I’ll see you soon.