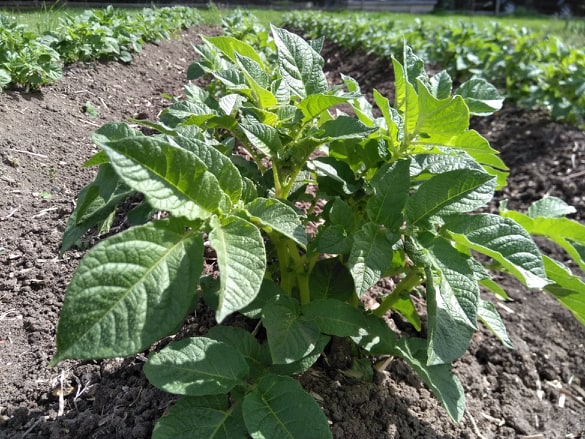 Yesterday was what I would call a Vivaldi day, we had a bit of everything – wind, rain, sunshine, hail, cool, cold, ruddy cold; it was just summer that was missing. What topsy-turvy weather we have; in February and at Easter we had conditions that we pray for on our annual jaunt to Cornwall, and then in May, blooming May, it is like this. There’s nowt to be done about it, just keep the chin up and carry on moaning, but I’m glad that I held off planting the tomatoes out in the polytunnel, they would not have thanked me for it. I am also pleased that I am not a participant in World Naked Gardening Day (yes it really exists), which was yesterday, because, well, you know…..and I wouldn’t want to put you off your Corn Flakes, the milk would probably curdle at the very thought!

Did you exercise your right last Thursday and vote in the local elections? Only 36% bothered to, so it wouldn’t be a major shock if you hadn’t. The two main parties suffered large losses, but it could have been very much worse for them had the smaller parties not missed a massive open goal. In the current political climate where the general populace has become just about as cynical as it possibly can be towards the ruling classes, largely due to 3+ years of tedious Brexit shenanigans, the time was right to really bloody the noses of the Tories and Labour, both of which are like rudderless ships going round in circles, slowly breaking apart in heavy seas. This could have been achieved if they (Greens, Lib Dems, Independents) had put up more candidates. We had a choice of Blue or Red, that’s all, and some seats were even uncontested. Where the minority parties got their acts together they did well; Mid Suffolk is an example, where, because of a proactive campaign by the local party, seven Green councillors were elected. Well done them, but it could have been so much better; not only could we have bloodied their noses, we could have punched their lights out!

Yesterday at the farmers market at Wyken I met an old primary school teacher of mine, who I haven’t seen since I was about 7 or 8 years old. Brenda emigrated to New Zealand and married a Kiwi (a man not a bird) back in the 1960’s. She was born and raised in Great Bardfield, the same village that I grew up in, and she is over for a holiday visiting family; how she came to be at Wyken is a long and complicated story which I will not bore you with now, but needless to say, it was lovely to see her. What I remember most about being in Miss Juniper’s class was being introduced to the 1812 overture, and at Christmas time watching the Disney film ‘Bambi’. Happy days.

I was concerned that the cold temperatures of the past few nights might have damaged the potatoes, but as of today they were still looking good and healthy. I am hoping that the apple blossom has come through unscathed too. Last week I hoed all of the lettuces, kale, broccoli, cabbages, chard and kohl rabi. The first of the properly outdoor lettuces should be ready to cut next week. This week I will be cutting round red tinged lettuce from under the glass cloches. I planted cucumbers early last week in the greenhouse, but they are not looking that great, it hasn’t really been warm enough for them. I have sowed more seeds in case they don’t make it.

The lettuces are limited, so multiple purchases may not be possible this week, there will also be radishes from the greenhouse. This will be the last week of wild garlic pesto, and the Purple Sprouting Broccoli has finished. There will be broccoli, courgettes, tomatoes, carrots, mushrooms, onions, beetroot and ‘Cara’ potatoes. Oranges, lemons, kiwi fruit, apple juice, honey and dried pasta make up the rest of what is available.

Nellie continues to settle in well, though the cat situation continues to be a bit of a challenge. In all other respects, other than the fact that she is obsessed with food, she is a joy to have around. She has singled out our little bantam as her best friend, though I think that the relationship is purely one way. She plonks herself right in front of ‘Little Pea’, whereupon the bantam pecks her on the nose as she rolls around submissively. This afternoon she became a workers mate as I began re-felting our summerhouse; Nellie decided that she could do some measuring up for me, but coming from Romania she just doesn’t understand inches. 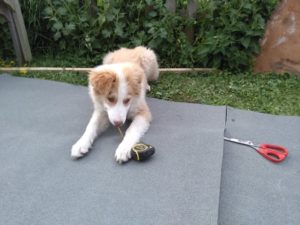 Okey dokey, I’m off now. Enjoy the Bank Holiday and the rest of the week.