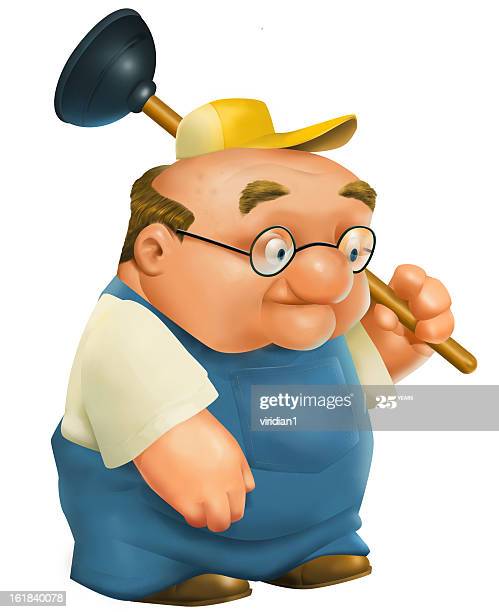 I’ve got the handyman bug. Following the construction of my machinery shelter at Moyns Park I just can’t stop making things! A few days ago I made a new roof for one of our chicken coops, and today I made a new floor for it. The girls are now waterproof and less draughty than before, so I’m hoping that they will repay me with eggs, because at the moment we are getting one, sometimes two eggs a day from 7 hens – it’s not good enough, it’s time they pulled their weight. I’ve actually been a bit of a domestic god today, I washed all of the downstairs windows, cleaned out the drains, then cut the grass; I shink (as we say in these parts) I scored multiple brownie points for that lot – and they are always worth banking. Amazingly I discovered a delphinium in bloom in the garden, and here we are close to the end of November, queer. 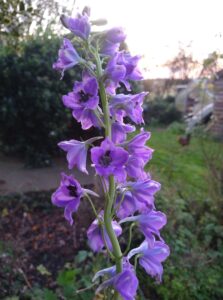 Meanwhile back at the day job I have had some mending to do. I walked down the garden early last week to discover a very distinct Muntjac footpath going from bottom to top, easily identifiable by the little hoofprints pressed into the damp soil. A couple of days earlier I had chased a rabbit off of one of the beds; this led to a lightbulb illuminating the dark recesses of my brain. Clearly the perimeter fence had been breached! I did a recce from the farthest corner of the plot, along the bottom boundary, and then up the side that runs alongside the orchard. About halfway up I found the point of entry, a gash in the wire fencing about two feet long, made by the tractor mounted flail when Alan cut the hedge a few weeks ago. At the break in the fence there was very clear evidence of a lot of coming and going by creatures with cloven hooves. I immediately got to work repairing the breach in the netting wire, darning a patch, not unlike those that my grandmother used to perform on my socks. I believe that the garden is once again secure….for now. I am hoping that the deer and rabbits are outside the fence rather than being captive inside. Just in case, I have set the live rabbit trap, baited with carrots.

I planted a bed in the greenhouse last week with mixed oriental salad leaves – Mizuna, Rocket and Namenia. The kale in the bay adjacent is coming on really well, and in the greenhouse the perpetual spinach is only a couple of weeks from its first cut, and the kale, cavolo nero, and spring cabbage are all establishing themselves. I have got some true spinach and pak choi seedlings to bring on before setting out in the greenhouse. 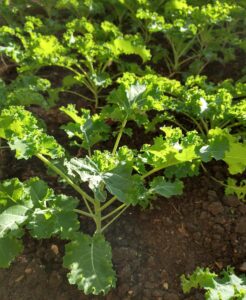 On this week’s availability list is a selection of lovely goodies. Let’s start with fruit. Oranges, lemons, kiwi fruit and apples; this week they are one of my favourites, Adam’s Pearmain. As for veg, there are cauliflowers again, cavolo nero, leeks, squash, beetroot, swede, parsnips, onions, carrots, red cabbage, January King cabbage, loads of potato choices, mixed mini plum tomatoes (I hope), and a limited supply of sweet potatoes, but you will probably need to be on your toes to bag some of them. The comment about the tomatoes is because it is getting very close to the end of the season for the Isle of Wight farm, and I won’t know if they have any for me until tomorrow, but I am hopeful.

Last Monday I went to the orchard to collect more of my juice – another 540 bottles. One of the batches was a sweet type pressed from russet apples, which I have added to the shop. I have a similar quantity of bottles still to collect, but before I pick them up I will be putting more air in my tyres, because last week the poor things were bulging somewhat under the load.

So just over a week until we come out of the latest restrictions – I won’t call it a ‘lockdown’, because it hasn’t been. I wonder what wizard wheezes they have cooked up to save Christmas? All will be revealed very soon. It is doubtful that the plan devised by Boris and his groovy gang will satisfy the scientists – the three horsemen of the apocalypse, or as I prefer to think of them, the 3 stooges. I picture them performing at a gala cabaret evening in the presence of….well nobody. There will be that old crooner Pat Vallance belting out the jazz standards clutching a handkerchief, then the oh so deadpan comic ‘Witty Chris Whitty’ who will have them rolling in the aisles, followed by a virtuoso electric guitar performance by the 80’s rock star Jonnie Van Tam….nice.

I haven’t mentioned Nellie for a week or two, so here is some gratuitous Nellie promotion; ain’t she purdy? She’s a bit naughty, but nice. 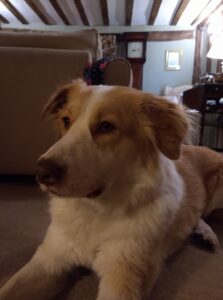 Have a good week, I think it’s going to be fairly benign weather-wise, so get out raking leaves, or admiring your stunning delphiniums….oh, or is that just me?